Every year Jay and I attend the air show. It’s something that we look forward to every year. In fact, in the 7 years that we’ve been together we’ve only missed one show, 2013, and that was because they cancelled it due to government budget cuts.

This year we had Leland with us. It was his first air show. 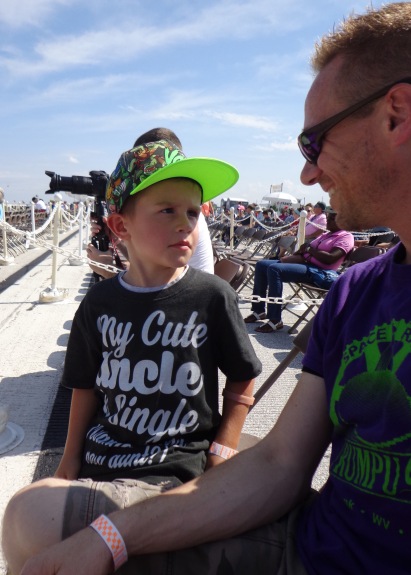 Uncle Eric was trying to work every angle that he could as evidenced by Leland’s shirt that reads, “My cute uncle is single. (Wanna be my new aunt?)”

We weren’t sure how Leland was going to enjoy the show as he is only 4, but he was more attentive than I expected. It probably helped that the air show tries to keep everybody entertained in various ways.

For instance, they had the Twin Tiger Aerobatic Team.

These guys were flying Yak 55’s painted up like orange tigers.

They did all sorts of aerobatic maneuvers.

And just when you thought that the kids were losing interest we heard a ‘ba-boom’ and saw a puff of black smoke start to waft upwards.

They were making smoke rings and competing to see who could either cut through, or fly through, the most.

I have to admit that instead of really paying attention to what the planes were doing, I was trying to figure out the physics of making these perfect smoke rings. And what do you have to do on the ground to make sure they are going to open up so beautifully? Unfortunately, I’m scientifically challenged so if I really want to know the answer I’ll have to ask Jay.

With the little bit that I know about flying RC airplanes, I know that some of these tricks are very difficult to pull off. So when I saw this: 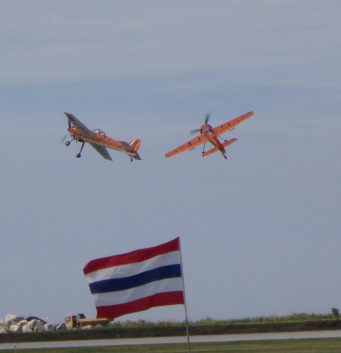 I was really impressed. They were flying at almost a 90 degree angle to each other, in a ‘V’ shape. They weren’t wobbly or anything, either. They kept their planes steady the entire length of the runway. It was impressive.

Of course, when you have a Jet Truck and an Aerobatic team, you have to have a race.

I believe the jet truck won.

Along with the zippy little fun planes, you also have your vintage models.

I have to include a picture of this one:

It’s not the best picture, but it’s my favorite modern jet. The A-10 Warthog. Isn’t she a beautiful sight?? They did a ‘tactical’ demonstration with the Warthog where they set off pyrotechnics as if it was actually firing the gun. I would love to hear “BRRRRRRRRPT” from the good side of things. Probably the only time Jay would have to worry about me leaving him is if I happen to meet an A-10 pilot. 😉

To cool down a little, we’ll take a gander at this big brute:

If you aren’t familiar, this is a C-130. Leland was pretty excited about this plane because they lowered the ramp and four ATV’s came flying out. I mean, technically speaking they came rolling out and they were driven by actual men, so it’s not like they were autonomous or anything. But it was neat to watch.

You have probably noticed that some of my pictures are nice and crisp, while others are not so crisp. That’s because I’m using a point-and-shoot camera to take these pictures. And most of the time I’m just pointing and shooting, while hoping that I managed to get at least a couple nice shots. I don’t have the big telescopic lens or super-fancy shutter speed camera. That’s why I’m happy if I get at least one kind-of neat shot. 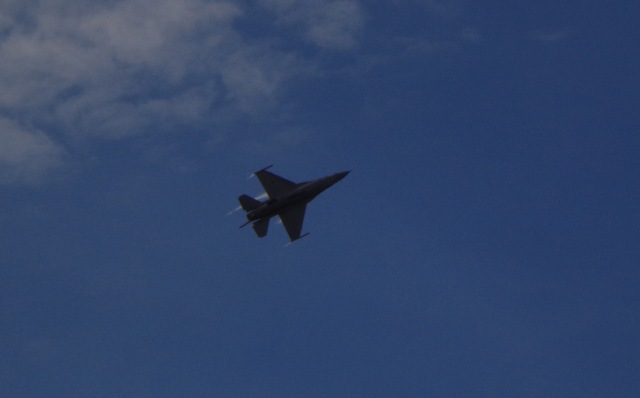 I consider this picture of an F-16 to be one of those shots. Also, this shot of an F-18 from last year’s air show:

And finally, we have the real draw of the entire air show.

(the song “The Boys Are Back In Town” begins to play)

Folks, please give a VERY warm welcome to the Blue Angels!!

Yes, I know that I’m a bit biased. I make no apologies. 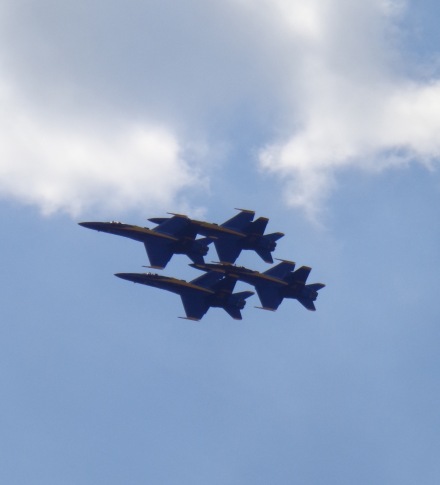 When they are flying I typically take a lot of pictures at the beginning of their show, then halfway through I stop taking pictures and just enjoy what I’m seeing. Again, once in a while I get a few good shots.

I think they should use that last picture for vision tests. “Let me know when you only see two jets…” I would enjoy that a lot more than the dumb hot air balloon that they currently use.

Once the actual air show is over we usually stroll along and look at the static displays. This helps to pass the time while we are waiting for the traffic to thin out a bit. There’s only one problem with this, at least for me. You see, this is at the end of the day when Jay has had a bit to drink and he starts checking out the jets. He points out how things function and what certain levers do when you pull or push on them. 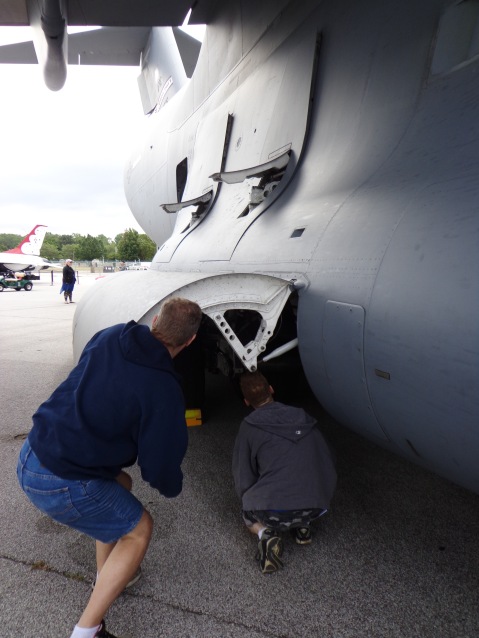 When Eric and Jay start to crawl INTO areas, that’s usually when I walk away. It makes Jay laugh, but I figure that if security is going to haul them away from the airplanes then I don’t want to be anywhere around. To be fair, Jay used to attend air shows when he was in the Navy and he says that the pilots just expect that people are going to touch EVERYTHING. Maybe. I’m not taking any chances.

Just like this guy. Obviously, he wants to make sure that nobody forgets about him if something happens:

And with that, another air show is in the books.