Every year Jay and I pick one large project to complete in the summer. We have redone the roof, updated our furnace and AC unit, put in a concrete driveway, improved our shed and replaced some large windows. This year we knew that the basement would be next to get our attention. When we first moved in the basement looked gorgeous.

Except, do you spot the problem in the picture? Do you see the spots where water is running across the floor? This picture was taken in December when we are getting snow and freezing temperatures. You can imagine how bad it looked after a really big storm.

Not only did we have a problem with leakages, but we were also noticing a very prominent crack in the wall. This worried us as we knew that foundation repairs can be very expensive. We called a local company who came in and gave us a quote to put in some new drainage, add a sump pump that actually works, and brace up the wall with carbon fiber straps. It wasn’t cheap, but it was necessary.

The first day of basement work happened to be the day that I came home from my Atlanta trip. I had left some very specific instructions with Jay regarding the cats and what should be done to maximize their comfort while this work was going on. As you can guess, he was thrilled to do it.

Day one started with jackhammers and buckets to haul the broken concrete out of the basement. Luckily we have an outside entrance that they were able to use so none of the dirt and dust had to be tracked through the house (thought it still managed to make its way up the stairs). Apparently the guys initially thought this project would be a piece of cake and they would easily have it done in three days instead of the four we had been quoted. Then they started breaking apart the concrete…

According to what they told Jay, there were two different layers of concrete for the floor. The first one was thin and easy to get through. The second one was not.

In fact, the second layer was so thick and hard to break that they weren’t able to make smooth cuts along the wall. The owner of the company was called in to discuss this and it was decided that they would have to use a different finishing product than what we had originally been quoted. It wouldn’t look as pretty, but since they couldn’t clean the walls perfectly it was really our only option. Otherwise the guys would have to spend another two days just trying to clean up the edges if we insisted on using what we were originally quoted. This would have been a problem because Jay wasn’t able to take the additional time off of work, so we agreed to go with the less-than-beautiful finishing product. The owner was really great, though, and took off a decent amount from our bill.

This picture shows the standing water that filled the trenches after the guys started busting up the concrete. This was coming up from under the house. It’s no wonder we have water issues! The sump pump is now located in this corner of the basement, which makes a lot more sense than having it in the highest corner like it was before.

I have to say that I was really impressed with the lack of dust that seemed to be created. I had expected a horrendous mess, but they were very good at cleaning things up during the entire project. And yes, they were using an electric jackhammer. 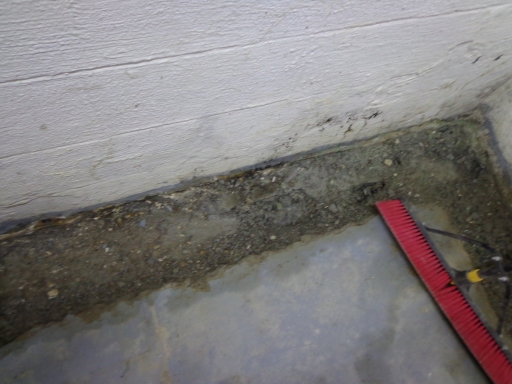 Not bad for the first day.

This entry was posted in My House, Remodeling, Workshop and tagged basement, Workshop. Bookmark the permalink.