How To: Easter Wreath

Every time I opened my front door to get the mail I would see the very wilted Christmas wreath hanging on it and think, “I need to do something with that.” Then after shutting the door I would forget about it until the next time I went to get the mail. Usually I don’t keep anything on the front door, but then as I was doing some inspiration research I came across this picture:

I really liked this! I felt the cross was a little big, but I loved the contrast of the grapevine wreath against the white flowers, which to me look like crocus.

I decided I was going to make my own wreath using this one as my inspiration.

I needed materials, though, so where did I head? Hobby Lobby, of course! (Have I mentioned that I’ve been going through severe Hobby Lobby withdrawal since July? After switching jobs I no longer work close enough to run there during my lunch break. It’s been a real boost to our checking account, but a severe drain on my mental health.)

I started out with a smaller size grape vine wreath. I bought two of everything so that I could make Karen one for her birthday.

Then I divided up the flowers I had purchased. I really wanted calla lilies, but they were very expensive (and I’m kind of cheap). So I bought one bunch of white star-gazer looking lilies and then a vine of purple flowers that I thought would really dress it up.

Now, I admit that I don’t have any kind of style and a lot of the time when I get an idea in my head I just keep throwing things together until it either works or ends up in the trash. I hoped this one wouldn’t end up as another failed project!

I played with the arrangement of the flowers until I thought they looked good. I then wire-tied them onto the wreath. It was my original thought that I could use wire so that if I decide to change things out it wouldn’t be too difficult. I ended up having to use hot glue, though, so there went that idea down the drain. 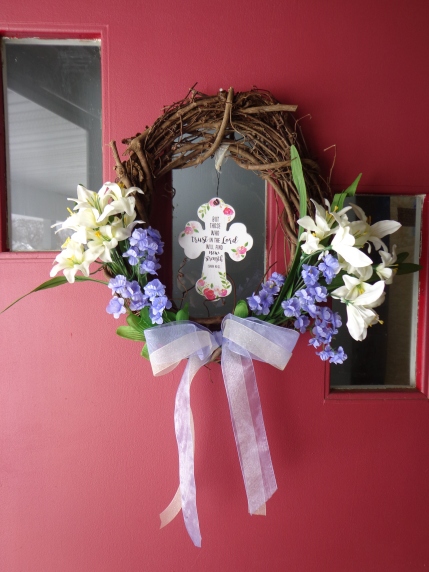 This was the final result. I used a purple and ivory sheer ribbon to make the bow and then glued it on the bottom. Jay helped me make a couple of hangers for the back, and I added the cross in the middle. It wasn’t my first choice of cross, but there wasn’t a large selection of crosses that really called to me. If I’d had more time I would have just had Jay cut one out with the CNC router, but this was a last minute project.

I guess it looks okay. You can’t really see it from the road, but oh well. It was a nice little experiment. And as a parting thought I’ll leave you with the passage that is on the cross:

1 Response to How To: Easter Wreath