Yesterday was the first chance that I really had to get out and work in my flower gardens. I only managed to weed one bed, but it was nice just playing in the dirt again. The last few weeks when it’s been beautiful outside I’ve been inside cleaning the house. First I threw a birthday gathering for Jay and then I had to clean in order to prepare for our Small Faith Group meeting. When I did have free time it was either raining or too cold.

I love Spring. Some people dislike it because there’s lots of mud. For me, though, Spring reminds me that Summer is on the way and there will be good things to come! Being out in the sun and pulling weeds made me think about my childhood.

I was raised on a beef farm so winter meant that we were stuck indoors most of the time. We did sled on the hill in the pasture, but most of our time was spent inside.

But when Spring came around and the temperature warmed up again we spent a lot of time outside. You can see the tire swing that our grandpa made for us and hung in the backyard. Our play area was fenced in so that when we were younger we couldn’t wander off and get hurt. Between the electric fence, the cattle, the creek across the road and numerous other things it would be easy to get hurt. 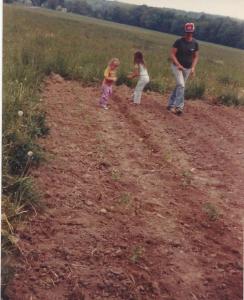 Once the last frost was pretty much done we would plant the garden. We had a big one out behind the barn where we grew broccoli, cauliflower, green beans, peas, tomatoes, and I can’t even recall what else we planted. My mom would either freeze or can most of what came out of there.

Growing up we didn’t have a lot of money because my dad worked either 2nd or 3rd shift at a factory and spent the rest of his time farming. My mom didn’t work during the school year, but in the summer she worked in a beauty shop since she was a licensed beautician. None of those occupations rake in the dough. 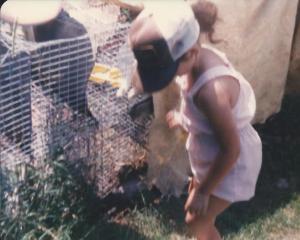 This meant that if my parents needed our help we were expected to do it. Just because we were girls didn’t mean that we got out of doing things that needed to be done. For my part I did manage to get out of any kind of chores that dealt with hay because of my allergies.

As soon as I could reach the clutch I was recruited to drive the tractor when my dad was putting up fence around the meadow in the summer.

I only drove my dad’s Allis, but I did that from the time that I was about 6 years old. That’s Jorma sitting on the Allis. He was a Swedish millionaire who was dating my mom’s youngest sister. He wasn’t used to being on such a high-quality piece of equipment. 😉

So whether I was driving tractor… 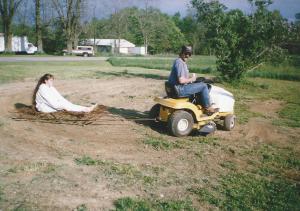 or acting as a piece of the equipment, I was involved. It meant that I spent a lot of time in the pasture, fields, and woods.

Living on a farm wasn’t all work. Most of the time we had run of the area around the house. Summers were spent in the creek across the road or exploring the area of the pasture where the cattle weren’t currently occupying.

As soon as the cows calved in the spring we had to make sure we stayed far away from them. A mama cow does not take kindly to anybody messing with her baby. The only way we were allowed to get this close was if we were walking in the pasture with my dad.

If you were wondering, yes we had a pony. Despite the fact that I’m riding Flicka I really didn’t care about horses one way or the other. I was never one of those girls who was crazy about horses.

I was crazy about cats. 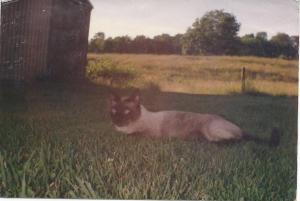 The same thing happened with Schwartz (my Baby Zhu-Zhu). His mother had him and his siblings in our barn, but he was really sick and we managed to catch him. He was the runt of the litter so I started calling him Squirt. I was babysitting that summer and the older kid couldn’t say “Squirt” and it came out kind of like “Squartz”. My dad latched onto that and wondered why the boy was calling him Schwartz. The rest, as they say, is history. 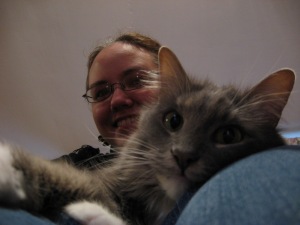 And even today, though I no longer live on the farm, I haven’t really changed a whole lot. I will take farm land and hills any day over a beach. And I’m still a Crazy Cat Lady.

This entry was posted in Cats, Garden and tagged Cats, Farm, Garden. Bookmark the permalink.