I’ve wanted to post on my blog, but everything that I’ve been working on are Christmas gifts. It’s really not fair if I show off the gifts before the recipients get to see them! Here is one present, though, that I can show off because my sister doesn’t read my blog.

For Christmas my sister is giving her step-daughter cake decorating classes. I think this is a great idea because I used to be really into cake decorating. Once I got busy and had to start eating gluten free it wasn’t nearly as fun. Anyway, so for Christmas Jay and I are giving Raven a really great decorating tools set. But she needs an apron.

I had been saving a denim skirt that I bought for cheap at Goodwill to make an apron for myself. However, Raven is a good kid so I thought I would use it for her.

I thought this was a very pretty skirt with all of the embroidery and beads at the hem. It has pockets and is very long. I am 5’10” and when I held it up to my waist the hem fell just a few inches above my ankles. Raven is not nearly as tall, so I had to do some shortening.

Here’s the deal, though. I didn’t have a pattern that I was working off of and I hadn’t really taken the time to work out the design. As I told Jay later, my projects would probably go a little quicker and smoother if I wasn’t making it all up as I went along. *sigh*

I started out cutting the skirt up the sides about 2″ back from the pockets. I wanted to keep them as part of the finished product. I then turned over the edge, ironed it, and turned it over once more. After ironing it down I then sewed it to finish the edge. This was when I really realized how long the apron skirt would be on Raven. So I improvised.

In an apron you can never have too many pockets. At least, I don’t think so. This was an A-line skirt so I knew that I wouldn’t easily be able to shorten it. That and I’m lazy and just wanted to get it done. What did I do? I folded the bottom up to meet towards the top and created pockets. I sewed the top, the bottom and the edges. I had one big pocket on the front, but I thought it was too floppy so I did a quick stitch up the middle. Voila! You now have an apron with two front and two side pockets. But, I know how messy buttercream icing can get, so this apron needed a bib. 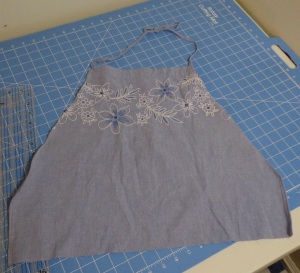 Using the other half of the skirt I angled the edges and finished them like I had finished the bottom of the apron. Then I used the string that was originally used at the waist as the neck ties. I had some material left so I cut 4″ pieces that I folded, ironed and sewed into ties, which then were sewn onto the skirt portion of the apron. Finally, I sewed the bib to the skirt.

Hmmm… I might need to budget for a model next time. Although, this model has some beautiful blue eyes to match the apron!

I’m not exactly pleased with the end product. If I had more time I would try again, but this will have to do for now. At least if she gets it all stained and messed up she won’t have to feel bad about it! This is one apron that she can get icing coloring all over and not feel bad that it is stained. Perhaps by next year I’ll have the design worked out and can make her a decent one!

This entry was posted in Sewing and tagged Apron, Sewing, Skirt. Bookmark the permalink.