We actually finished the wreath stand on Saturday and delivered it to the church on Sunday. However, my week has been so busy that I haven’t had a chance to post the last batch of pictures on my blog.

Finally the glue was dry! The post seemed to sit level. Everything looked good.

It was starting to take shape! All that was left to do was drill the holes for the threaded inserts and make the ring.

After making a jig to ensure that the drilled hole would be straight up and down, Jay quickly drilled the holes and cut some threaded rod.

Next we had to make the ring. Jay had a plan using steel rod and these blocks that he screwed onto his work bench.

Always a bit dubious, I asked him how in the world was he going to make a round ring using blocks set up in a square??

I was told to sit back and watch the master work… after getting a refill.

First he made connectors. He had two 8′ pieces of steel rod that he was going to connect and bend into a circle. Except, as he got started he realized that he bought cold-rolled steel instead of the hot-rolled steel… or whatever it’s called. What that means is when you bend it the metal takes the bend and stays that way, kind of like a paper clip. This wasn’t part of his plan and it wasn’t how he was going to make the ring. 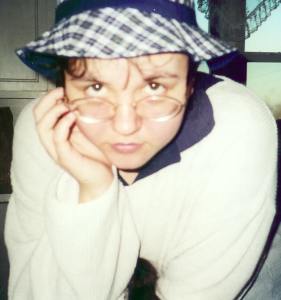 Now what are you going to do??

He quickly drew up a circle with the same diameter as what we wanted our ring to have, and then used his CNC router to cut out a portion of the arc. This was then secured to the work bench so that he could bend the steel into the exact curve that would be needed. Them we encased it in vinyl tubing and connected the ends to seal it.

And don’t you know that it came out as if he had planned it that way! Like I tell people all of the time, Jay can know what he has to work with and what he wants the results to be… then he kind of tosses it all around and out it comes! It’s a bit frustrating for those of us who are unable to do things like that.

So we had the ring assembled and we thought that we would place it on top of the arms. Except when we tested the fit with the candles, it didn’t work out so well. Jay ended up fashioning a screw for the bottom of the arms that had a piece of tube soldered to it in order to hold the hoop. Of course it worked! This is Jay we’re talking about.

I wasn’t going to include this picture because of the amount of mess, but it struck me as funny. He was cutting the threaded rod down to size for the candles. I promise that he’s not drinking the lacquer thinner.

Let’s recap, shall we? To start the entire project Jay drew this up:

With a little tweaking we ended up with this: 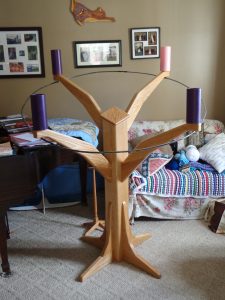 It looks pretty nice, doesn’t it? 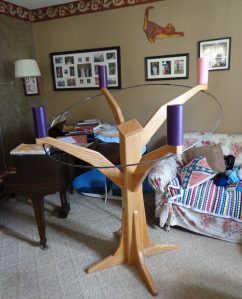 We had to deliver it to the church already because it takes up so much room! We are hosting Thanksgiving so we’ll be tight on space. There’s no way we could have this sitting around, too. Plus I was afraid that something might happen to it.

Do you want to get an idea of what it will look like with the wreath actually assembled? Here’s my really bad Photo-shopped rendition:

The real wreath will look way better. But it at least gives you something of an idea.

After investing all of that time and energy into this project I wanted to make sure that the arms would be somewhat protected when it is being moved and stored. I decided to make protective sleeves for it.

Luckily I had a lot of help and supervision.

This is what I came up for a design. It is very similar to the wing bags that I make, including the end being fastened with Velcro so that the arm can’t slip out.

Not too shabby, eh?