Rockin’ Out with the Train Layout

In the quarry Jay was finding pieces of rock that would be just perfect for his train layout.

While recuperating from surgery he spent time making rocks, plastering them on the layout and then making more rocks. It was quite the process.

But I think that he’s doing a fantastic job!

We had a little issue, at first, with colors not quite looking right. He did some more mixing, some more testing, and this is the end result.

Please excuse the pictures as I took them with my old 3G iPhone.

They really look like rocks! Once we get some lichen and tufts of grass added it will be even better.

Jay thinks that they look like No Bake Cookies with some Cocoa Pebbles thrown in for good measure. Mmmm… chocolate… 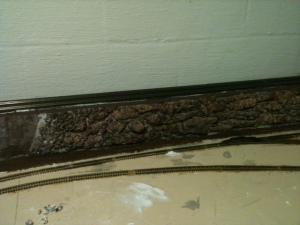 I think he’s doing a fantastic job on it!

From here it looks good!

He’s been working on these, too.

Although, it was kind of strange to find one laying on the stand that sits on the front porch. Either an ant carried it up there or it grew legs and walked.

Some of them, though, have found a place on the signal bridge that Jay 3D printed.

When my camera battery is charged I’ll get some better pictures, I promise!

He even 3D printed a post for the signals that stand beside the tracks.

This guy is really tiny.

But he sure is cute!