Last weekend was the annual craft show in the town where my friend Sarah lives. My mom and I set our stuff up on her lawn last year, which is directly across from the park where the craft show is held. This is good for us because it saves us the $450 booth fee that the craft show charges. We were going to set our stuff up again this year, but my mom had a bad headache so we ended up not doing it. Which is okay because it was a sad turn-out. The park was only half-full of vendors and the people were looking, but not buying. I had made a few things for it, though, so I thought I would show you what I had been furiously working on for the show.

First up are a few of the aprons that I made. This one was actually for Sarah as a thank you for giving us a space on her lawn.

My idea with these aprons was to put a loop on them where I can hang my towel and always have it right at hand.

This particular apron was actually made out of a ladies’ jumper. 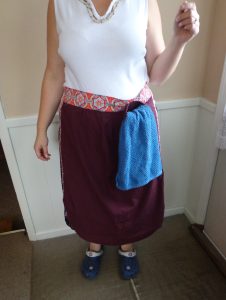 This next apron I had to make a waistband for it and edge the sides.

I made this one using a man’s button-up shirt. I used one of the cuffs as the loop for the towel.

This is another apron made from a man’s shirt. It’s not very fancy, but it’s utilitarian.

Please excuse my model. This was her first job and she’s not very good. I told her not to quit her day job. 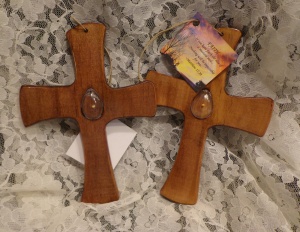 Another idea that I had was this wooden cross. Jay cut them out with his CNC router and then I finished them. I placed a mustard seed in the middle and covered them with glass globes. Then I printed out a little card with the verse from Matthew that if you have faith as small as a mustard seed then nothing will be impossible.

The idea for these purses hit me when I was at my church’s summer festival and I watched little girls carrying money around in their hands because they didn’t have any pockets. I thought that I would make some little purses that I would have loved to carry around when I was younger.

I used Velcro as the closure on this pink rose purse. 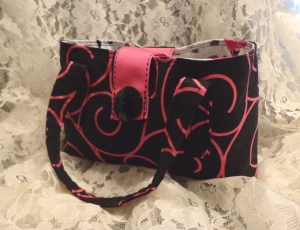 This pink swirly purse has handles instead of a long strap. Also, I used the pink roses fabric to line the inside. I sewed the button on the ribbon and used Velcro as a closure.

This one reminds me of a book bag that I had in third and fourth grades. The blue ribbon is sparkly and the little heart buttons glitter at you, too. 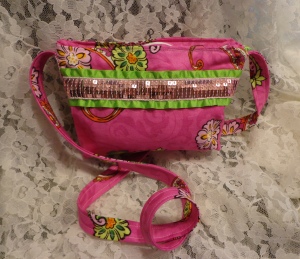 This was my failed attempt at making a recessed zipper. The most impressive thing on this purse is that I put the ribbon on the front and back before sewing it together and I managed to match the ribbon up at the seams!

Plus, sequins make everything better.

It’s cute, though, so I hope it catches a little girl’s eye. 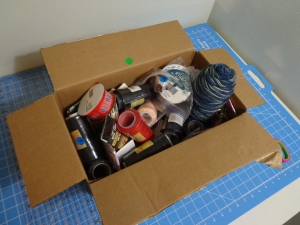 I did end up visiting with Sarah for a few hours even though I wasn’t selling any of my stuff. Her church was having a yard sale on her lawn so I hung out and helped with that. Sarah pointed out a box of sewing stuff to me. After one glance I yanked it off the table and gave them the $5 that they were asking for it. This was the deal of the day! Would you like to see what my $5 bought?

Nine cones of black thread… two cones of white thread… two cones of nylon thread… four other colors of cone thread… over 30 packages of bias binding… an almost full skein of Red Heart yarn… wooden beads… misc beads… some ribbon on spools… a sewing kit… some steel rings… a deck of cards… and a handmade hair barrette. It was a steal!