Last fall during National Sewing Month I did a blog post with entertaining ads that I had found on Craigslist for sewing machines. I enjoy visiting the Craigslist postings for various cities around the country to see what people are selling in relation to ‘sewing’. Most of them are average and run-of-the-mill, but I have run across some pictures or postings that make me pause. Here’s another series of these ads that I’ve found recently… 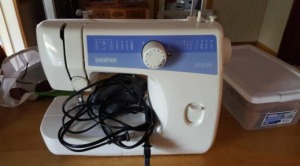 Works, but needs some tension adjustment. Could be done by someone who actually knows how to use a sewing machine. Me, not so much.

At least they are honest! 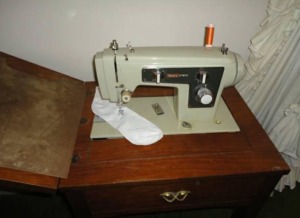 Sears-Kenmore Sewing Machine – Model 5186 with cabinet. Working condition and ready to use. $200 OBO.

First off, you’re going to be hard-pressed to get an offer of $200 for this machine. It’s not a Singer Featherweight or 301A. My favorite part of this picture is the sock under the pressure foot. It makes me laugh. “We’ll put something in the machine to make it look like it’s ready to go and can sew. What do I have? Hmmm… Here’s a sock. That will work!”

This ad didn’t have a picture. Not only do we not know what brand of machine this is, but we have no idea exactly what accessories are included. Even if we were intrigued and interested there’s not even a price posted. Something makes me think that this person may not hear a whole lot regarding their ad! 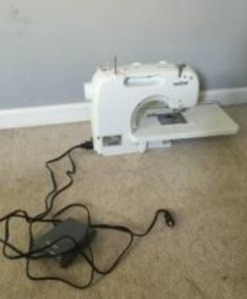 I got this sewing machine as a gift, I have only used it once and I am moving and need to get rid of it ASAP.

This person received this machine as a gift? Did they ask for it? Or did somebody just randomly give it to them? They might have used it once, but apparently they aren’t well versed in machines to know that you should at least include a picture of the FRONT of the machine. The back of it usually doesn’t tell us much, nor does the fact that you included the pedal in the picture. One other thing that pops into my head is they have to get rid of this ASAP because they are moving. There is NO WAY that they can possibly fit it anywhere on the moving truck. It is in the way and if they don’t get rid of it ASAP then the whole move will be ruined!

Hello, I have a friend that is I need of someone to sew or can make contest swimsuits, or stripper clothes. Or Skimpy model kind of contest outfits. Thanks so much.

My eyebrows shot way off of my forehead when I first read this. When you start to read it you think that maybe somebody participating in a pageant is looking for somebody to make them unique outfits to help them win. My assumption quickly changed when the ‘stripper clothes’ came into the picture. Then, just to make sure that we are clear as to what kinds of outfits are needed further clarification was added, “Or Skimpy model kind of contest outfits.” Yikes! I guess that you have to like sewing fabrics with a lot of stretch like spandex and lycra. I give this person credit because they were very polite and it’s so nice that they are trying to help their ‘friend’. 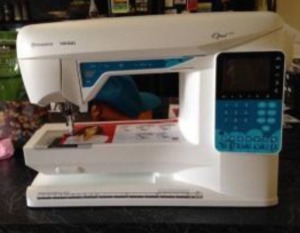 Excellent Condition! Used only once! Recent break up. Need money!

I am actually surprised by how many machines I see on Craigslist that mention they were only used once. What? Once? And you gave up? In this case, though, apparently the recent break up has caused the seller to give up on any hopes of doing more sewing. Instead, this person is so desperate for money that they are willing to give it up for $55. They are definitely low-balling themselves. This is the perfect time to play on the sympathy of others and ask for $150. I would be more willing to give $150 for this machine than $200 for the Kenmore up above. Not that I would actually pay $150 for this machine, but you get the idea. 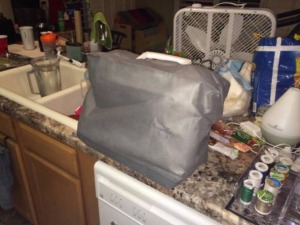 The Singer Sewing Machine has never been used. We were gifted another one so we don’t need this one. INcludes the case and bobbins. Asking $180 OBO.

To be fair there were other pictures posted on this ad that actually showed the machine, but this picture cracked me up. In my head I can hear my mother picking out all of the junk that you can see in the background. If you’re going to post a picture to sell a machine don’t you think you would want the machine to be the focus of the picture? They couldn’t have found a less cluttered place to take a picture? When I look at it my eyes automatically go to the box fan, then the dishes on the counter, and then the bag of snack-sized bags of chips. Also, did you notice that this person was gifted another machine so they don’t need this one? Who is gifting all of these unneeded machines? 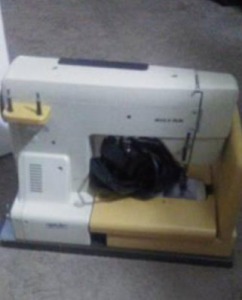 Sewing machine for sale don’t use it because I don’t know how to lol..

I like the fact that this person is completely honest and tells you that they don’t know how to use a sewing machine. Which is obvious because the only picture included in the ad showed the back of the machine as it sat on a driveway. Also, it was taken from a distance away. I cropped out most of the driveway below it. 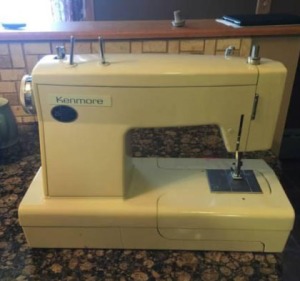 Singer Sewing machine – needs minor repair. If you are familiar with sewing machines at all I’m sure this is an easy fix. We don’t use it and won’t take the time to fix it. You pick up, its yours.

I hate to disagree, but this machine is going to need some pretty major repairs. I can tell just by looking at the picture. First thing you’ll have to do is change it from a Kenmore to a Singer. I did look and I didn’t see another post by this person with a Singer pictured and ‘Kenmore’ listed in the headline. If it needs minor repair, why don’t you state what the minor repair is that will be needed? “If you are familiar with sewing machines at all I’m sure this is an easy fix.” You can’t even state the correct brand of machine yet I’m supposed to believe that you have determined that the minor repair will be an easy fix? It’s like saying that if you are familiar with cars at all that I’m sure this is an easy fix and the vehicle ends up needing the engine and carburetor rebuilt. At least they appear to be just giving it away instead of feeling that it’s worth at least $100 because it’s ‘vintage’.

I hope that you enjoyed these ads! These types of ads keep me looking for more… 🙂