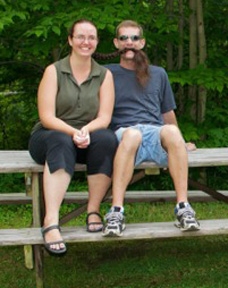 When Jay and I met five years ago he was a smoker. On July 14, 2013 he gave up smoking because he was too lazy to turn right to go buy a pack of cigarettes before heading to work. He has not had a cigarette since then thanks to the use of eCigarettes. He was able to step down his intake of nicotine with their help. I know how hard it is to give up an addiction. I’ve fought the battle of weight gain all of my life. Every year I try to give Jay something special to celebrate his anniversary of no smoking. Okay, maybe it’s not so much a celebration as it is a bribe. 😉

I discovered that there was a train show happening this past weekend within driving distance. The description led me to believe that it would be better than it was, but it was a fun little trip and it’s nice to do something like that once in a while. I gave Jay a handful of cash and told him that he could get whatever he wanted.

I had hoped that some of the manufacturers would have booths, but it turned out that this was more of a swap meet, or flea market for those of you who have never been to a swap meet. There was a LOT of old dusty stuff that these guys had dragged out of storage.

My hope was that I could find some more structures or kits for the layout. I was also hoping for some deals on the scenic finishing stuff.

I was very disappointed to find out that 90% of the stuff there was HO scale. This one vendor had a TON of Walthers structures for sale, but all of them were HO.

The engine on top is N Scale. The bottom is HO. It appears that HO is the most popular scale for guys to use. If you don’t have a lot of room then you go with N scale because you can do a decent layout at that size. However, it limits you a bit as to what you can find. We may end up scratch building a lot of stuff.

There were some displays so I studied them to see how they were finished and what I felt looked good versus what I didn’t want on our layout. My biggest complaint is that most of these structures look plastic, since that’s what they are. They definitely need more finishing touches.

Here is an HO scale church on one display.

And here is an N scale church from another display.

These churches are both similar in style to what I want for our layout, but you can tell that they are both plastic! Will I be able to get our structures to not look so plastic-like? I sure hope so. I guess that will be my goal to work towards. 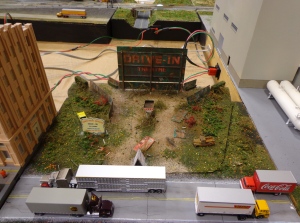 On these displays it’s the detail that makes or breaks it. Take a look at this dilapidated Drive-In theater that was part of one display. Not only did he do a great job of making it look old, but the little details really add to the realism. There is trash scattered about in the Drive-In grounds, but take a look at the road. There are skid marks and cracks that have been filled in with ‘tar’. Also, isn’t the cattle truck cute? 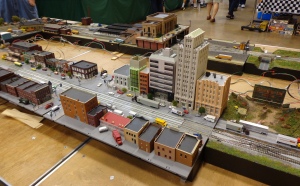 This was my favorite display at the show because of the detail that went into it. It was a big rectangle with the city and Drive-In on one side, a train station and road on the other side, industry on on end… 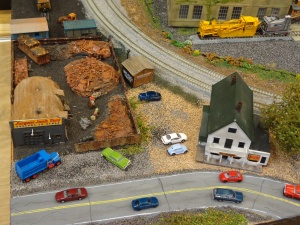 And a rural scene on the other end that included a farm (it had John Deere tractors so I didn’t take a picture) and a junk yard. Again, it’s the details that really get me. I wouldn’t have thought of putting the ‘tar’ repair lines on the roads. Take a moment to look at the junk yard, too. At least there’s a beer distributor!

Back to the city area of the display. There was even a construction crew! I did have a slight problem with this little scene. If you noticed there are way too many guys ‘working’ and not nearly enough standing around. Come on! You were doing so good with all of the realism! 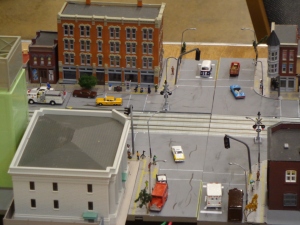 One more shot of the city scene on the display. Hey! Does that apartment building look familiar?

Yep, it’s the same model that we are using on our layout. I kept my eyes open because I like to see what other people did with the same buildings that we are using. Everybody has a different interpretation. Mine will be similar to the one above.

Then I found another one of these buildings in a different display. This person went with a much darker brick, which still looks really good.

I believe that this layout is still in progress because there wasn’t a lot of scenery detail.

It shows you, though, how something like this has the potential to turn into a display much like the one up above.

Here was another display that used many of the same building models that we are using. This one is more of a city-on-a-hill scene. This is the display that had the N scale church that I showed you up above.

This is what gives me anxiety when I think about having to do the scenery when we get closer to that point. Look at how many layers are on this forest scene. How do you know when you’ve added enough? How do you know if you need more? Am I going to be able to step back and add these touches in moderation?

Or am I going to get to this point and know that it needs more, but not be able to figure out what ‘more’ means. *sigh* It’s a good thing that I’ve got some time to figure it all out!

I did find some N scale items.

I didn’t buy it, but I thought that this semi truck was absolutely darling! I just didn’t think that it was $21 darling!

How can something so little cost so much?? 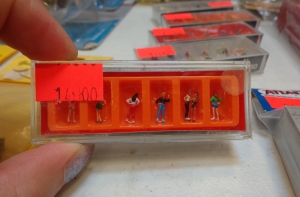 And look at these little people! At $14 for the entire set you are paying more for the material in the packaging than you are for the people. N scale people always remind me of those grains of rice that have been carved or painted. 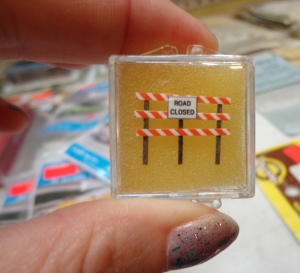 And if you’re modeling a city scene you definitely need a few of these!

Again, can you tell how small they are? Barely bigger than a postage stamp!

In the end we came home with a few things. Jay bought two more engines to pull his ever-growing collection of cars.

Including the newest set of intermodal cars that he bought that day.

I was looking for more vehicles and found these. We are going to need more semi trucks and trailers considering the amount of industry that we have going next to our tracks. But I’m not spending $21 a piece for them!

I also found this Warthog! I’m not completely convinced that it’s actually N scale as the booth where I found them had other toy cars that they were trying to pass off as N, but I couldn’t leave it behind. I figure that I’ll set it up as a static display at the ultra light air strip. After all, if you had the room for it wouldn’t you want a Warthog on static display in your yard??

Finally, I managed to find some cows. It’s criminal that you pay almost $1 a piece for them, but until I find the N scale cattle auction I guess that I’ll have to take what I can find. Luckily my beef farmer isn’t one of those who only buys a certain breed. We will have a diverse herd of cattle where all breeds are welcome because in the end they all taste the same with a little steak sauce!