At the beginning of the month we had the concrete pad on the front porch fixed. This was a huge relief to me because there was quite the gap that had formed between the concrete and the sill of the house. When it rained water ran TOWARDS the house and there was enough of a gap that the critters were getting in. When the concrete guys were bracing the porch roof they discovered that the header was horrible and we had to do something right now.

The general contractor showed up (he’s the concrete guy’s cousin) and gave us an estimate. It was much higher than I wanted to pay, but we had to get it done. The contractor had another job he was working on, but he promised to be here on the 14th to get it done.

The 14th came and went… no contractor.

The 15th came and went… no contractor.

On the 16th Jay called him up and asked what was going on. The guy had forgotten about us! He promised to be out on Monday, the 20th. Unfortunately I had to take Jay to the ER very early that morning due to abdominal pain (after some tests this week it’s looking like he’s got gallstones) so I was home when I heard voices at the front door… at 10:30. Apparently this guy doesn’t feel that an early start to the day is good practice. I went out and talked to him. He was taking measurements and getting his materials list together. Then he promised he would be back the next day.

Tuesday morning at work I received a phone call at 11:30. It was the contractor telling me that he wouldn’t be over that day because they hadn’t managed to clean the gravel off of his trailer the night before like he had expected. So he would be over on Wednesday instead.

Wednesday night I got home and found a pile of materials on the porch, but no work done.

I left for work Thursday morning and besides the trailer that had been dropped off at some point the night before (we’d never heard them drop it off), there wasn’t a sign of the contractor any where. I got home from work that night and it was all done. Jay told me that they had just finished up around 5:00.

It was nice to no longer have the braces in place with the caution tape wrapped around them.

I was still irritated with the many delays and what I felt was a steep price for the work. 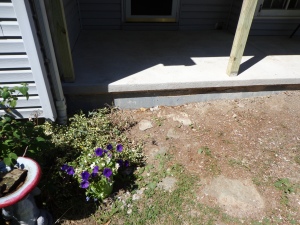 I do wish that he had placed one of the posts about a foot more to the right. I know that he had never seen it when the other posts were in place, but you would have thought that he could have seen where the end of the walk meets the porch and figured out post placement from that. Now I have to move a bush over to the other side of the walk so that we can pour a step.

We decided to leave the railings off for now. The porch feels so much bigger without them and I don’t think that we’re missing much by not having them.

The contractor showed back up Thursday night after I got home so that I could write a check out for him (the checkbook was in my purse). He left and I decided to go change into my play clothes so that I could do some sanding and polyurethaning in the basement. 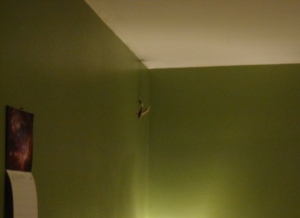 I started to change and happened to look over at the corner of the bedroom… and saw this!

They had put a hole in our bedroom wall! There was plaster and wood pieces all over the night stand on that wall.

Apparently when they were trying to take the old beam down this happened. The contractor was supposed to show up last night to start the process to fix this, but two hours after he was supposed to show he finally contacted us and said that he will have to be over today instead. So… this front porch has morphed into yet another project.

I know that we really needed to get it done. The contractor said that if we hadn’t fixed it now that the porch roof would have ended up collapsing this winter because the wood was that bad. They didn’t have many big pieces to haul away because it all crumbled into dust. Jay said that the front porch was absolutely filthy with rotted wood.

I’m just irritated with this whole thing. It took us a year to get the concrete guy out here to do the work. Then the general contractor gave us a steep estimate just to constantly delay things. If I ever need another general contactor I will definitely NOT be calling this guy!