The last time I showed you any pictures about my attempts at crocheting I was working on this piece. I had no idea what it was going to be, but I was just practicing my stitches. As you can see, I’m not very good at crocheting yet. My sides are all wonky and I kept adding and losing stitches. Bob likes sleeping on it, though, so I’ve placed it on one of this sleep pads near the heat register.

So that I wouldn’t get bored I picked up a multi-colored skein of yarn when I was out shopping. I chose a very inexpensive skein so that I wouldn’t feel bad about just making swatches with it. Obviously it didn’t have the same feel as the previous one because this yarn is an acrylic and the swatch above is a cotton yarn.

I also purchased a class on Craftsy called Crochet Basics & Beyond. Kim Werker is the instructor and I enjoyed her lessons so much that I also purchased her second class, Next Steps in Crochet , despite the fact that I’m not ready to move onto it. I’m still trying to make a swatch that doesn’t have wonky sides! 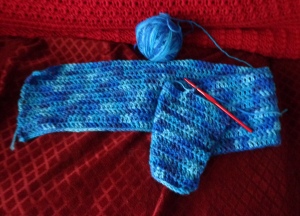 This is my third go-round on this swatch. The first time I was REALLY way off with picking up and losing stitches. So I tore it all out and started again. The second time I did a better job, but I still wasn’t happy. I tore it all out and wound up this ball of yarn. The third time’s the charm, right? Let’s hope so! This is all just double crochet right now, but I think that I will throw in some treble crochet and perhaps half-double crochet.

So far my edges are looking pretty good.

I am working on this just until I’m happy with how my stitches are going. When I feel that I’ve got it down a bit then I might switch over to the shawl that I want to make.

Remember this shawl? I still haven’t even started it. I don’t want to be tearing it out a million times so I’m trying to be patient. 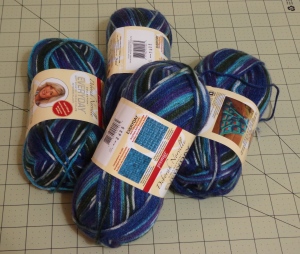 It’s hard, though, because I purchased the yarn on Black Friday at a really good price! These colors look nice (at least, to me they do) and it’s a lovely-feeling yarn.

In the meantime, I’m still plugging away on this stuff. When I tore my stitching out the second time I wound the yarn into a ball, but I was having a hard time keeping it from running away when I pulled more yarn off of it. I was trying to decide if I should buy a yarn holder thing when I thought that would be stupid as I’m sure that I have something around here that would work. And I did! There’s nothing that a good plastic dish can’t handle!

Also, one other thing that I’ve discovered…