Is there anything better than spending time working on a gift for somebody and you just know that they are going to love it? Okay, perhaps actually receiving said gift is better, but it really is a toss up for me. If you’ve spent any time on my blog at all you already know that Jay and I love making things with our hands. At Christmas we really get to use that to whatever extent we want. We actually were commissioned to make two gifts for other people this year. 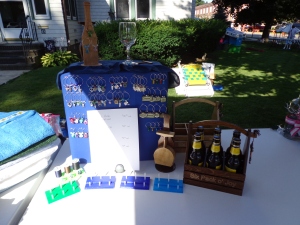 This is my display at the craft show I attended this year, but apparently it’s the only picture that I have of our Six Pack ‘O Joy that we make. Jay’s aunt saw it and wanted one for her son-in-law. We even personalized it so that it said ‘Eddie’s Six Pack ‘O Joy’. We haven’t heard what his reaction was, but prior to Christmas his aunt was VERY happy with it.

One of our friends at church wanted a name sign for her daughter and son-in-law. Their names are Kimberly and Kimber, so she wanted a sign that said Kim squared. The husband is a big Civil War buff, they both like to garden and travel, so Jay personalized it a little for them.

The grapes represent not only their love for gardening, but also the fact that they come from a large grape-growing area. Above the ‘Kim2’ you can see the contrail from the jet that is flying across the sign.

And then the crossed flags, rifles, and kepis for the Civil War.

I think that it turned out rather nice.

Last year for Christmas we made my dad and my brother-in-law wooden crates and filled them with goodies. Jay wanted to make something for both of them this year, but we were drawing a blank. My sister came up with the idea of making old-fashioned tool boxes for them and stuffing them with goodies. Good thinking!

Poor Chuk… Jay thought it would be hilarious to make it look like he had messed up when cutting the name into the box, and instead of fixing it correctly he just “crossed it out and continued with Chuk’s name”.

I also stained them in two different colors so that I could tell whose was whose when I had only the handle showing from the gift wrapping. 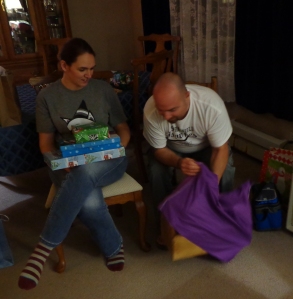 As you can see, I really did a fancy job when wrapping them.

I took a king size pillow, chopped it in half and sewed up the ends. Then I cut a square out of the top so that we could grab the handle.

Those pillow cases actually fit quite snugly around them.

I had forgotten to take a picture of the boxes stuffed with goodies before I put the pillow cases on them. Once the cases were on I was NOT taking them off.

So here is Chuk modeling his snack box.

And my dad was very excited about his.

I was the recipient of a few handmade gifts, too! First here is the cat clock that Jay made me. I had wanted a clock for our family room and the weekend before Christmas this was what popped into Jay’s head.

He did a good job staining with the different colors. He modeled it after Bob’s colors. I can’t wait to put this on the wall!

Then my mom made me a wind chime! This was made out of a wine bottle that she modge-podged pictures of Bob, Chester, and Joey on for me.

What? You can’t see it. Hold on… let me bring it closer…

And there’s Chester! She’s just watching to see what you’re doing, on the off chance there’s a possibility that she could maybe get some treats.

And for cuteness overload…. there’s Joey!!

Technically he’s my sister’s cat, but everybody loves Joey! He’s just so stinkin’ adorable! Warning, he’s for decoration only! Do not expect him to play with toys or exert any kind of energy to do anything more than sleep, cuddle or eat. 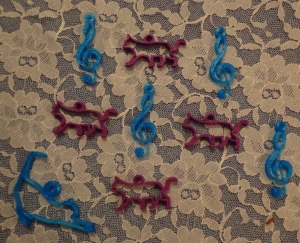 Oh man… it looks like I need to get going. The cats are causing treble….