After one week of working on the Spad, this is what it looks like. This thing is going to be huge. (That’s what she said.)

I really do think that we will have to buy a trailer just to haul this to the field to fly. Have I mentioned that my husband is a bit spoiled??

Well, let’s see what other pictures have been taken…

When building an airplane sometimes it helps to do simple little tasks if you’re stuck on a problem. I don’t know what problem Jay was stuck on, but he made a little tower out of his blocks of weight.

Or maybe he’s gluing something together? *squints at the pile of stuff* Hmmm… 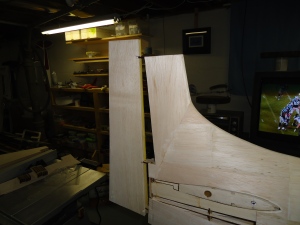 It looks like the hinges have been installed, but he made the rudder too long. 😦 Or is the top of the tail too short?? I always tell Jay that he needs to Measure Twice, Cut Once.

Also, apparently if you watch football while building it will really help you build a lot faster. At least, this is the observation I have made while looking at these pictures.

Uh-oh! There now appears to be a growth developing on the top of the tail!

Wait… that growth looks familiar. The last time we saw it was when it was stacked up with the weights. And it looks like it’s being shaped… 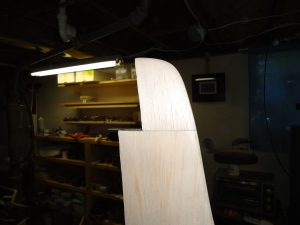 Ahhh… now I understand! Our tail was too short so now we have grown it a bit.

On any other plane this picture could look like Jay was shaping a wing tip.

Or he had created a wooden faucet.

Or it is the wooden representation of Gonzo’s nose.

Or it’s just the rudder with a matching growth to the tail.

*whistles* What a nice piece of tail!

Its supple curves cry out for you to grab it and give it a little squeeze.

Shall we move on and cool down a little?

I think that I’ve found the robot’s legs. Those 3D printed yellow hips look a little bulky, though. 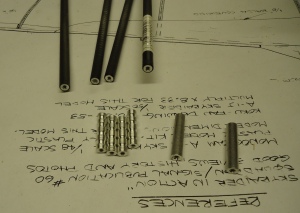 Hmmm… and some bling…

I know that this has to be leading somewhere, but where? Any ideas? 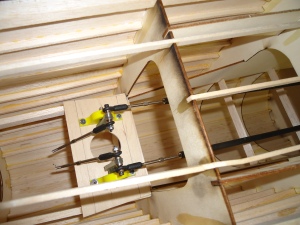 Jay is using carbon fiber arrow shafts as push rods so that they will be much sturdier (and cheaper). He also 3D printed up the yellow pieces and the control horns for the push rods to connect to. 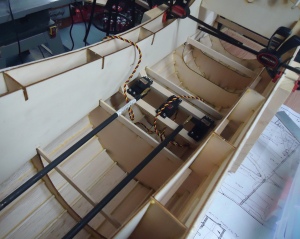 See! There are the other ends of the arrow shafts. He is attaching them to the servos that will run the stuff in the rear (I think that these are for the elevator, but don’t quote me!)

Wow! That was a lot of work! After all of that gluing, whittling and shaping I think that I need to take a break. We are flying through this project!