There is a LOT to sheet on this plane.

Well, we better sheet or get off the pot…

The fuselage is beginning to fill in. And we have some more fly-away pieces towards the back, but those will be taken care of in a moment.

This airplane looks big, doesn’t it? Let me see if I can give you a little bit of perspective…

I don’t know if this helps, but this is Jay holding the firewall piece to this airplane. What he is holding in his hands goes on the front of the plane in the picture right above this one. See how the shape matches? Yep, this is going to be one honking-big airplane!

Well, what do we have here?

The flopper goes back and forth, while the flappers go up and down.

*sigh* Jay says that this is the elevator, not the flappers. They both go up and down!

Look! Jay made little feet for a robot!

I thought that he was building an airplane, and now he’s making a robot? 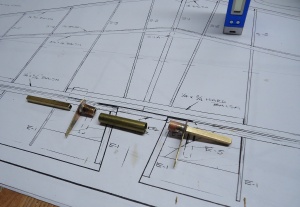 Oh! Apparently these aren’t robot feet. They are part of the mechanism to make the elevator flap. So, he’s using two square rods and the robot feet to match the round tube where they will be inserted.

Thus the reason why he put the tribal mask in the middle and made the horizontal stab into three pieces. 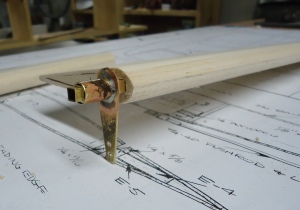 Here is the elevator’s peg leg.

And now it has fancy gold fangs.

I vant to fly your plane!

And here it is after a mere four days on the bench. Can you believe it?! Only four days… it’s amazing how much you can accomplish when you really put your mind to it!