Have you ever been on Craigslist and realized that you had just spent WAY more time than you wanted looking at junk other people are selling? Me, too! My favorite part, though, is reading the ads that either make no sense or else the people are WAY too honest. My favorite one was the ad in the ‘Free’ section where somebody was giving away boxes of cereal. It turns out that he had purchased a bunch of Lucky Charms, but had picked out all of the marshmallows so all that was left was just the actual cereal part. His roommate was unhappy with all of the boxes sitting around their place so he was trying to give it away to anybody who wanted it. He figured that maybe a daycare or somebody would be interested. And don’t worry! When he was picking the marshmallows out he was careful and didn’t touch a lot of the cereal.

Well, for today’s post I thought that I would look to see what I could find on Craigslist in regards to sewing machines. I found some pretty interesting ones (original typos included) …

I see the cabinet… but where is the machine??

antique sewing machine dates back to 1902, works and has an electric motor this will sew through leather and canvas

If you were entertaining the thought of paying $499 for a machine, wouldn’t it be nice to actually see it? 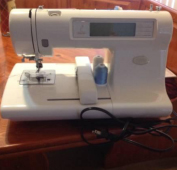 Hello I’m selling a baby lock espree machine for $280. works great for sewing shapes and pictures and more thanks!

It took me a few moments to realize that by “sewing pictures” she meant that it’s an embroidery machine!

At least this person is honest…

I purchased this sewing machine during the height of my Pinterest obsession with the belief that I could make all kinds of adorable and crafty things. It turns out that was not the case. I made 2 napkins and that was all.

I bought this sewing machine in factory RECONDITIONED condition, and it is in perfect working order. I still have the manual if you want it.

Another honest seller! Quick question, though… wouldn’t you toss the manual in with the machine regardless if the buyer wanted it or not?

This is a older sewing machine we bought for my daughter.
I don’t know how to feed the thread in the spool but it worked when she used it.

Apparently just looking at the back of the machine is enough to determine if you are interested in it.

The sewing machine has been checked out and needs a new motherboard or motor according to a Sewing Machine Repair place in Hurst, TX. The machine is fairly new and hardly used. My wife and her mother tried fixing it and it became worse.

This one made me laugh out loud. Is there some hidden hostility for his wife’s and mother-in-law’s ability to repair anything?

Singer back and forth pedal sewing machine – $225

Absolutely beautiful case cabinet on this ornate 1900’s sewing machine with carved fronts on the drawers and ornate carvings on the sides. Black iron works. Must see, prettiest one I have come across. Singer Manufacturing Co. Serial No. G982908 on right front of machine on a plate. Pristine Oak wood. A great find. I have enjoyed it for a good time now and it’s time to pass it on.

When I saw the title of the post I knew what I was going to find in the picture, but it still made me laugh! 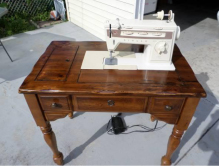 Rare, Vintage Sewing Machine with Table in great condition. It might need a minor tune up or fix, but other than it’s a great machine and table. Please call

I hate to tell these people, but I saw at least another dozen of these Singer machines on Craigslist. I have to admit, though, that I would almost pay that much for the cabinet alone!

Finally, I had to laugh when reading this wanted ad:

I just need a BLENDER!!! Any kind… I’m desperate for a blender! I would really prefer an awesome Vitamix blender, but I’ll take ANYTHING! Oh, and if you happen to have a sewing machine kicking around I might be willing to entertain the purchase of that for a reasonable price. BUT I REALLY WANT A BLENDER!!!