Once you start sewing regularly you notice that not only does your material start reproducing, but your spools of thread start acting like unruly teenagers. You put them all together, but when you try to find them they are always as far away from you as possible. Then when you’re trying to get them singled out they cling to the others and you can’t ever find their matching bobbin. The spools have no idea where they last saw them. Maybe the bobbin is under their bed? They think that they brought it home from school… 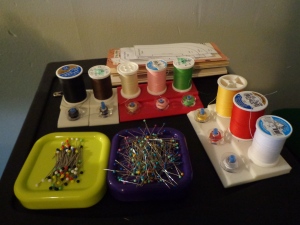 To help combat this issue I had Jay print some spool holders for me. These work great! Most of my sewing involves the Dresses for Missions and I’ve discovered that I’ve collected numerous colors of thread in order to sew up these dresses.

I kept having to ask Jay to print more holders for me. And they were starting to get out of control. 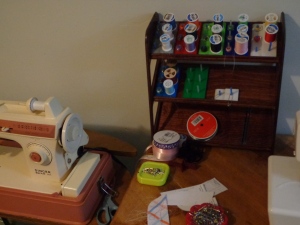 I asked him to design a holder for my spool holders so that I can reclaim some of the space on my sewing table. When I need to use a certain color I can remove the 3D printed holder from the shelf and set it on the table. Then it easily goes back in its place when I’m done.

Jay and I have been trying to put the CNC Router and 3D printer to use in order to generate some income, and thus recoup some of the expense. One of my ideas was to do a smaller version of my spool holder for other sewers.

This is a prototype of the initial spool holder that I had in mind. I have already made an arrangement to have a friend who sews test this out and give me honest feedback. I designed this so that you can put hangers on the back and hang it on the wall if you don’t have the table space for it.

The next prototype that I’ll also have my friend test is a fixed design. This is for the sewers who typically only use a few colors so they don’t have to have very easy access to it. It’s just a nice way to keep the bobbins and spools together.

Or, if you use a lot of one color you can fill up three bobbins at a time and have them ready to go along with extra spools sitting behind it. You might have white on top, black on the second row, and maybe cream or ecru on the third row.

Again, this one can also have hangers put on the back.

Those are just a few ways that I’ve used to organize my spools and bobbins. I am constantly changing out my thread on my machine so I needed something that was going to be easy to access, but keep everything right at my fingertips and organized. What do you think? Do you have any ideas that I should incorporate into an organizer? Please feel free to share your ideas in the comments!