A Visit to the Garden Center!

It was Memorial Day weekend and one thought popped into my mind: It’s time to plant!

Where I grew up you didn’t dare to plant your gardens until Memorial Day weekend because there was still the chance of a killing frost. Thus it just became a habit with me that I planned to work in my garden Memorial Day weekend. Now that I live in an area where I can get away with planting a few weeks earlier I’m still having trouble getting over the habit that I developed long ago. This year, though, I just didn’t have time to get out there, or the weather didn’t cooperate. Finally, though, it was time!

The local garden center is about a 10 minute drive from my house and they open at 8 a.m. on Saturday. At a few minutes past 8:00 I kissed Jay goodbye and told him that I would be back shortly. I think that it was 9:30 when I got home. How could I possibly have spent that much time getting plants? Let me explain…

I LOVE the garden center. I’m allergic to almost everything in there, but I LOVE it. I typically have a list in my head of what I want to get, but that doesn’t stop me from walking all over and looking at EVERYTHING. 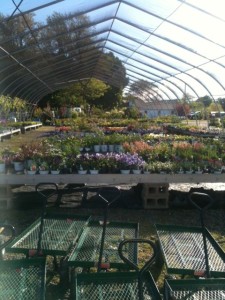 I started by grabbing a wagon and taking a glance at the perennials. I might actually need to go back and get some once I decide what I want to do around the flag pole in our front yard. However, that was not on my list for the day, so I continued on my way. 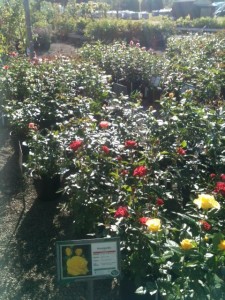 My mother-in-law bought me a rose bush from this garden center last year, plus I returned and bought one for myself. They weathered our harsh winter beautifully! I probably spent no less than 15 minutes walking around looking at every single rose and trying to decide where I could put more roses in my yard.

Who wouldn’t be happy seeing this in their garden??

Or a bunch of these in their garden?

As I continued on toward the vegetable plants (my main reason for being there), I couldn’t help but notice this area.

At least if I ever run into the Knights Who Say Ni I will know exactly where to go to get a shrubbery! 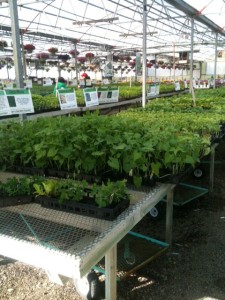 I finally made it inside where they keep the vegetables. I think that they have every single vegetable you can possibly imagine. And some that you haven’t!

I was boring and just picked up some cherry tomatoes, beef steak tomatoes, burpless cucumbers, zucchini and green peppers.

Next was the hard part: Deciding what flowers to plant in my non-rose gardens.

Of course, I stopped in the area where they keep the pansies.

They had these violas which just shouted at me. They needed a good home in my garden. I said okay. 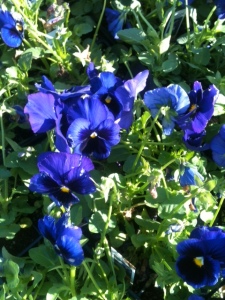 And who could say no to such an adorable little pansy face? Certainly not me! These little guys came along to keep the violas company.

What I love most about the garden center is that no matter where you look there is COLOR every where! I don’t like geraniums, but you have to admit that they are beautiful in this picture.

I ended up getting some petunias (another favorite of mine), some begonias and sunflowers. 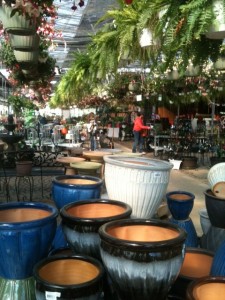 I wasn’t done looking, though. 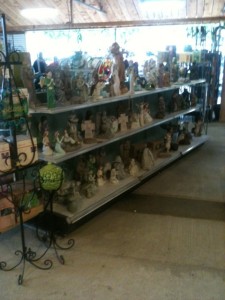 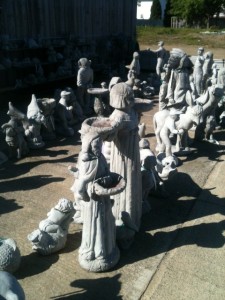 I spent a bit of time walking among these guys. It amazes me just what somebody has designed to put in gardens.

I saw this cat that reminded me of my sister’s cat, Joey.

Who wouldn’t love a Joey in their garden??

Now that I’m Catholic I suppose that I must get the mandatory Mary for my garden. I think that it’s in the Catholic by-laws that you have to have a statue of Mary in your yard somewhere, and you get added points if it’s set within a buried bath tub. 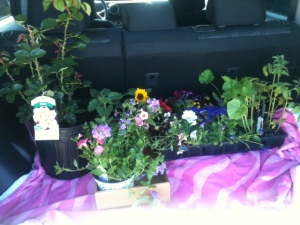 After all of that looking, this was what I ended up taking home. Not as bad as you probably thought.