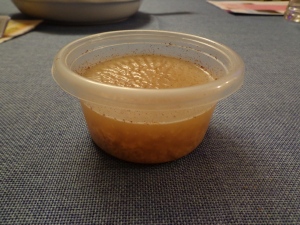 Mood Update: Still stressed, but with a smile!

Mmmm… doesn’t that look yummy? No?! Are you sure?! Yeah… this was my fail this week. Usually I like to show pictures of things that I can take pride in displaying. This week I decided to show you that even I have some food flops. Big ones. I believe that I mentioned last week that I had a food epiphany regarding black licorice flavored gummies. On Saturday I had some time so I thought that I would do some creating in the kitchen. Except, I misplaced the recipe that I was going to try. Since I couldn’t find that I decided to try a different recipe for Paleo Egg-not Pudding. It had a simple list of ingredients (all of which I already had) and it didn’t seem too complicated. Yup. Riiiiiiight….

I will give this another try at some point, but not right away. I’ve been doing a lot of reading about how good for you gelatin is and how we don’t get enough of it in our diet. I gathered a bunch of recipes, most of which require the use of a blender and lots of boiling down of berries, and now I will have a terrific excuse for needing to chew on my gummy treats. Once I attempt to make them. It might be a while before I try that again, though.

This week I must confess that I had to taste a little of the carrot cake cupcakes that I made last weekend. I shared half of one with Jay and it was delicious! Except, about a half hour later it felt like a rock in my stomach. I could hear my stomach poking at it and saying, “What kind of junk are you dumping in here??!! I just got this area all cleaned up and then you bring something like THIS in?!” I didn’t have any more after that, but that was mainly because I made my mother-in-law take the rest of them to work with her. lol

The other reason why I was surprised to have lost weight is because this was a VERY stressful week. By the time that I got home from work on Thursday I’d had enough. I burst into tears and I could feel that all of my muscles were tense and on edge. It took a while, but I eventually calmed down that night. Luckily I have a husband who lets me rage on and on until I have exhausted myself. Usually he’s just happy that he’s not the reason for my rage!

So, that’s how this past week went. I don’t really have any goals for this week. It’s Holy Week so I’m not going to have a whole lot of chance to cook or prepare many meals. There will be more stress, too, but hopefully without any break downs!