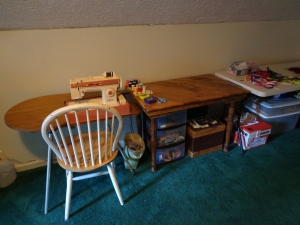 I haven’t had a whole lot of time to sew lately and my mending pile was growing.

Jay had a couple of sweatshirts that he absolutely loves, but the zippers were no longer working. About a month ago I had ordered some longer, heavier duty zippers online and they’d been sitting around gathering dust. 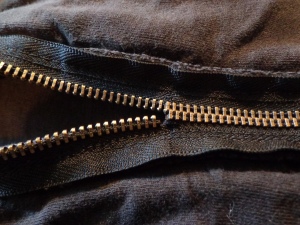 This is what happens when a piece of molten iron lands on your zipper. Luckily it just burned through the zipper and didn’t hurt Jay at all.

I have never ever sewn a zipper in my life. I’ve always heard my mom complain about what a pain zippers are to install or replace so I had tried to avoid it. Jay LOVES this sweatshirt, though, and I can’t find one to replace it. So, ever a dutiful wife, I forged ahead. 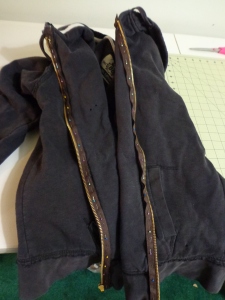 I ripped the other one out and carefully pinned the new zipper in place. This is a heavier sweatshirt, so I had to bend a few pins before I discovered the best way to pin it.

Then I got the zipper foot out of my sewing machine case, put a heavy-duty needle on the machine, and got busy.

Yeah! It worked! I even managed to line the pockets up pretty good. I wasn’t too worried as this sweatshirt will be worn to work again where I’m sure Jay will be able to burn more holes in it.

After installing the zipper, I wasn’t quite finished. The same piece of iron that had burned through the zipper had also burned a hole in the right hand pocket. Jay asked if I could please patch that up.

It’s not the prettiest patch job that I’ve ever done, but it works. Again, he’s just going to end up burning holes in it, so I didn’t stress over it too much.

Luckily, I had some help…

Chester was holding the sweatshirt down so that it wouldn’t move while I was pinning the zipper on it. She’s so helpful!

Luckily I had purchased two zippers, so when Jay handed me another sweatshirt and asked if I could replace that zipper, too, I could say yes. 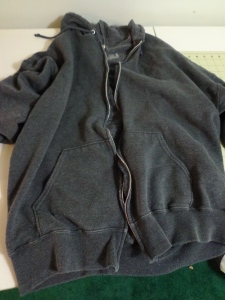 I’m not sure what happened to the zipper on this one. The teeth all looked fine, but the runner wouldn’t move. It was stuck all the way at the top.

This was the second one that I worked on and it was a little trickier. It wasn’t as heavy and the seven-year-old in China who sewed it together had me a bit flabbergasted. It looked like they had serged the zipper and the edge of the fabric together, then folded it over and ran a straight stitch up along the zipper to keep it in place. 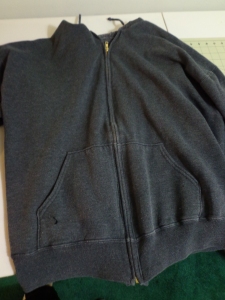 This one gave me a few more problems than the first one. In fact, I had to re-pin the left side of the zipper about three different times. I finally sewed it on and zipped it up. Close enough for me!

Not bad for my first time working with zippers!

This entry was posted in Sewing and tagged Sewing. Bookmark the permalink.