Many people think that Jay is spoiled because he received a 3D printer for his birthday and then was allowed to buy a CNC router this summer. The guys who know him think that he’s the luckiest guy because I don’t put my foot down on these kinds of purchases.

What they don’t understand is that Jay gets these kinds of toys, and then I put him to work on various projects for me. Isn’t that what a wife is supposed to do? Jay received a compound miter saw for Christmas, which will come in very handy for finishing the trim in the library and for when I need picture frames built. See… I can be devious… Mwahahahaha… 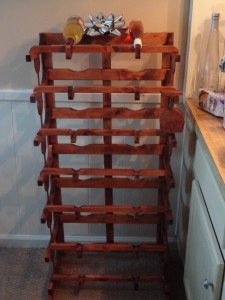 My Christmas present… a new wine rack! Isn’t it pretty? Yes, it can hold fourteen bottles of wine and it takes up more room than most wine racks, but I love it.

I helped with the basic design, and then let Jay take it over from there. 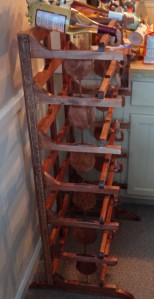 This piece isn’t purely about function. And some might argue that it’s not a very efficient use of the space, but I like it. This is a unique and one-of-a-kind piece of furniture. I wanted something that could easily handle the weight of that much wine without toppling over or tumbling down. 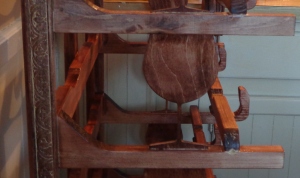 This is one of my favorite features of this wine rack. On each side are wine glass cut-outs that not only are decorations, but they act as part of the support structure. Oh, and Jay added the piece of decorative molding along the back, too. 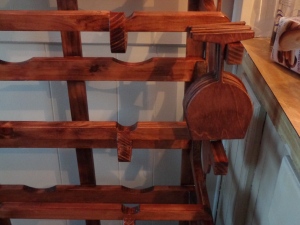 As a bonus he cut out extra wooden wine glasses and made them into coasters. His mom has already asked for a few sets of these to give out as gifts. They don’t need to be water-resistant because if you’re using them for your wine glass there shouldn’t be any condensation to gather at the bottom.

My sister gave me some wine glass markers for Christmas. I’ve already asked Jay to put hooks on the wine rack so that I can store the markers there and won’t have to hunt for them when they are needed.

Now, for this next gift I have to admit that I stole the idea and twisted it a bit to make it my own. I had heard about this site where you can order crates of stuff for the men in your life. It arrives in a crate, with a crowbar, and the guy gets to use the crowbar to open it and then enjoy all of the fun stuff inside. I looked at the site to see if I could find something for my dad. Unfortunately, I didn’t see anything that my dad would really enjoy. I was showing Jay the site and telling him that I didn’t know what to do for my dad when he said that he could build a crate for me.

We had a LOT of fun with these crates. Jay designed and built two of them, one for my dad and one for my sister’s fiancé Chuk.

For Chuk we placed two six-packs of beer that he likes plus a rubber band gun that Jay had 3D printed. These crates were sturdy enough to handle that kind of weight. I believe that they were about a foot square.

We placed a piece of bubble wrap on the bottom to cushion the bottles, and then filled most of the space with Styrofoam peanuts. 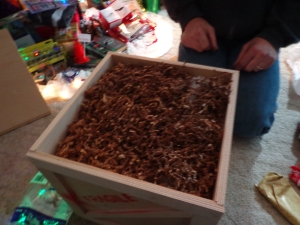 To top it off I bought some shredded paper that is typically used in gift baskets and placed that on top. Voila! A packed crate!

We did the same for my dad, except his was filled with nuts, sugar-free candy, bacon jerky, and an extra little gift (more on that at the end of this post).

We added some extra little details, too. Jay used the CNC to make a ‘Fragile’ stencil to be used to mark the crates. He also painted the up arrow on the side. We found some of the plastic envelopes that go on the side to hold the packing slip, so I wrote up a couple of packing slips to put in there. Finally, they were nailed shut and I wrapped up a little crowbar to be used to open it. Oh, and they also were wrapped just so that they couldn’t look at them beforehand. 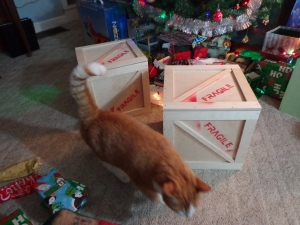 They had Chester’s seal of approval, so we were all good to go.

I think that they enjoyed them. They were a bit confused when I had them open the crowbar first. The last I heard both my dad and Chuk were planning on adding hinges and then using the crates to hold other things.

So, what was the extra special gift that was added to my dad’s crate? In a previous post I mentioned that I had used Modge Podge to transfer a picture for the first time. I wanted to practice first, though, before I ruined the piece of oak that Jay had cut out for the box that I was giving to Pauline.

I used a picture of me and my dad when I was about three or four years old. It was Easter and he was decked out in the orange polyester suit that my grandmother hated, but everybody else thought was hilarious. Needless to say, this has become quite an infamous picture in my family.

When I put the picture on the scrap piece of wood I dropped it and it was on there crooked. After I had finished with it I asked Jay what we should do with it. This was his idea. You’ve all seen the beautiful work that Jay has done with various projects. He has some real skill when it comes to working with power tools and wood. His idea was to make it look like this was his first project ever, just to get a good laugh out of my dad. Do you know how hard it was to do this bad of a job? It’s so bad that it really is hilarious. At least, it is to us!

This is the back. I told you had I had used a piece of scrap wood that Jay had started to cut something out, but had to stop and readjust something. Then I used it to see what color of stain I liked best for Pauline’s box. When I was experimenting with the Modge Podge I had just flipped the board over so that I would have a flat surface. Jay cut the end of the screw and one of the nails off so that they wouldn’t be poking out. But I think that the topping on this cake is the picture hanger… upside down… and taped on. LOL.

My dad plans on hanging it in his workshop and bragging that his son-in-law made it for him. 🙂

This entry was posted in CNC Router and tagged CNC Router. Bookmark the permalink.