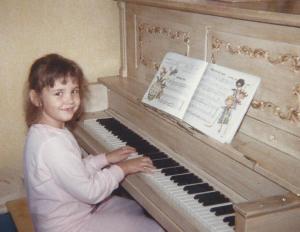 If you know me, or if you’ve followed my blog at all, you might know that I play a little bit of piano. I realized the other day that I’ve been playing for about 30 years. Yikes!

I’ve never been very good at it, though. I can’t play by ear. I can’t play just by looking at the chords. And I never have enjoyed practicing. It would bore me out of my mind to play the same song over and over, hoping to not make the same mistakes. I did something right because in my ten years of piano lessons I think that my teacher made me redo the same lessons again only once.

I LOVE playing piano, but I hate practicing. Are you shaking your head yet? It’s the same as exercising… I hate to do it, but I really enjoy taking walks. Doesn’t make sense, does it?

I play piano for the pure enjoyment that I derive from it. If it’s just me and the cats then I play and sing all that I want without worrying about wrong notes, pauses for turning pages, or not finishing the song. Yes, I’m notorious for not finishing songs. I will start into it, maybe sing the first verse and a bit of the chorus before I decide that I’ve had enough of that one and move on. I can easily play through an entire piano book without playing a single song all the way through.

In high school I decided that I would accompany the elementary select choir that I had belonged to at one time. Our choir director was not a strong piano player and she welcomed me taking over the piano part while she worked on the voices. Then she had me accompanying the high school chorus… and then the various select choirs that I also belonged to.

Then after my school merged with a neighboring district there was enough money in the budget to hire a full-time accompanist. I was no longer good enough. In fact, after the merger I was barely good enough to be in the chorus. Sure, I had a strong voice, but I was no longer somebody to whom my chorus teacher looked to for leadership in my section. If other altos were having trouble getting the notes they were told to sit near me so that they could hear what I was doing. Yet, at the end of the year I didn’t receive any of the special certificates that were given out for chorus. The popular girls received ‘Strongest Voice’, ‘Section Leader’, and ‘Most Musical’. Again, I wasn’t good enough.

I’ve just realized that perhaps that’s where my fear for performing in public really started to gain traction. I had always had a case of nerves before a concert, but they have managed to get worse over the years. To be fair, I haven’t had a chance to perform in public since high school. Except once or twice in college. And now that I think back on it, the choir director had me accompany the group during practices but when it came to the actual performance he hired somebody to come in and play.

After college I continued to purchase piano books and plunk around here and there, but I didn’t play very much or very often. A lot of it was because when I lived at home my piano was relocated to the living room where it seemed like somebody was always watching TV (so I wasn’t able to play). Then when I moved to my own place it seemed like I just didn’t have the time to spend playing it. There was even a point where I decided that maybe I should just sell it.

But I didn’t. Instead, Jay moved it into our new house for me. I joined the church choir shortly after that and I have played it steadily since then. Again, most of it is for my own enjoyment. I don’t like to play when I think that Jay can hear me because I don’t want him knowing just how bad I am at it.

I tried to keep my piano playing to myself. I didn’t want the choir director at church knowing that I can play piano. Everybody instantly thinks that if you play piano then you are like Elton John or Billy Joel; you sit down at the keyboard without any music whatsoever and every song comes out flawless. Nope. Not me. I need music to read. I was never taught how to play out of a Fake Book (one where just the melody notes are given and you have to make up your own accompaniment with the left hand using only the chords that are written). Not to mention that the thought of playing in front of a group of people makes me as nervous as a long-tailed cat in a room full of rocking chairs!

Then one night at practice the choir director was trying to go over a bass line, but since her primary instrument is guitar, she was having a hard time recalling which notes were which. I couldn’t take it anymore and asked her if she would like me to play the notes for the men. There went my little secret… I was able to explain to her about my weaknesses and she was very nice in not trying to push me. Jay, however, had his foot firmly planted in my rear to push me forward. For some reason he thinks that I’m good enough to play in church. I wanted to ease into it, but that didn’t end up happening.

After having accompanied the choir on one or two songs it was suddenly decided that I would be good enough to fill in. My choir director’s parents live out of state and she had to take off to go help them out. She gave us a heads up, but somehow all of our usual guitar players were all out of town that same weekend. At mass we typically have two acoustic guitars, a bass guitar, and then the director’s acoustic guitar. She will play piano on most things, though, to help round out the sound. Well, it just so happened that on Father’s Day NONE of the guitars were going to be there. Which left just me… One of the other church members plays guitar and will fill in sometimes for the director, but nobody else plays piano.

Due to other obligations I only had one week to practice. I was a nervous wreck! I just knew that I would play horribly enough that people would comment on it later. I’m not familiar with a lot of these songs because they aren’t the songs that I heard when I was growing up the few times that I attended church. I don’t know the tempos for the different songs… I wasn’t sure just exactly where the various mass parts come in… and I was terrified that I would mess the Allelulia up enough that Jesus himself would look down from the cross and scowl at me!

I couldn’t tell the director ‘No’. In fact, I have a very hard time telling anybody ‘No’. Jay doesn’t even hear it very often! I felt that as part of the Music Ministry it was my obligation to step up when needed. So I did. My mom always used to tell me that practice makes perfect. So I practiced… and practiced… and practiced!

Poor Chester was all out of sorts last week! Every time I play piano she complains and walks out of the room. If I continue to play piano she will walk back in the room, complain to me, and walk back out. She is NOT impressed by my piano skills at all!

After Jay would leave for work I would sit down and practice for two or three hours. One night I spent an HOUR on the Alleluia! And I still didn’t have it right. Sunday was edging closer and I felt like I was going to ruin mass. Except, not only was I playing for the mass that I usually attend, but I was also playing for the second mass, too!

To say that I was stressed about it would be an understatement. Sunday morning Jay got up way before me, but I didn’t really get much more sleep. In my dream I was practicing the Alleluia. Can you believe that even in my dreams I wasn’t getting it right?? I couldn’t take it anymore and so I got up to actually practice it again. Yes, it was only 5:30 a.m. but I needed to get comfortable with it.

Despite my nervousness, I had a lot of compliments after both masses. Nobody pointed out my obvious mistakes, which was very nice of them. I just hope that they don’t expect me to play every week. I don’t have enough time to practice! I think that it would raise some eyebrows if they knew how much time I had actually spent on just those few pieces of music that week.

I did learn something from this experience. I learned that I never want to own a digital piano. Sure, they seem really cool and are actually much cheaper and lighter than a real piano, but it’s just not the same. Even when they weight the keys and set it in a piano-like frame, it just isn’t the same. The keys still felt like plastic. The keys didn’t have the same feel to them because of the lack of hammers. And when the power is out you can’t play it!

When I was in college our chapel had a Steinway Grand Piano. The chapel was open most hours of the day, so on the days that I didn’t have afternoon classes I would take a piano book and head over there. The Steinway was not in the best shape. There were dings and scratches all along the case and some of the keys were chipped. However, it still had that marvelous Steinway sound and the keys felt heavenly beneath my fingers. I often joked with my friends that if that piano ever disappeared they were not to ask me any questions! The sad thing is that I don’t know if many people would have missed it.

I won’t ever be able to afford it, but I would be perfectly happy with the Steinway Baby Grand Piano (Model S). Even with it being a baby grand it would take up a large portion of my living room. But can you imagine the sound? If I were to win the lottery I would build a house that would have a music room where the acoustics would be perfect to set off my Steinway’s gorgeous tones. Again, I would only be playing for myself, but it would be some of the most enjoyable hours ever spent. Maybe if I had a Steinway Chester wouldn’t yell at me for playing the piano!

This entry was posted in Music, piano and tagged music, piano. Bookmark the permalink.