It is the peak of building season and Jay’s workbench has definitely not been idle. He is still plugging away at the Panther, but he purchased an early Christmas present for himself and started work on that right away.

The A-4 Skyhawk as designed and manufactured by Yellow Aircraft. This picture is rather deceiving. You can’t tell just how large this jet is by looking at this picture. It’s huge. And when the boxes arrive all that’s in there are the fiberglass fuselage, foam cores for the wings and tail, and lots of balsa. This is a kit so Jay is really happy about that. He loves tinkering with these. 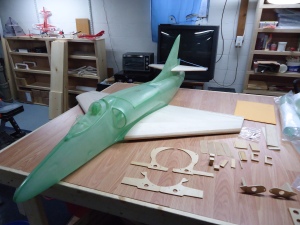 This gives you a little bit of an idea what is involved with the kit. Basically this is it. If you don’t know much about these kits (like me) you might think that there’s very little left to do. Maybe glue the wings and tail on and then you’re ready to fly. Woo-hoo!

Nope. Let me take you on a little journey called “Building an A-4 Skyhawk from a Kit”. The A4 posts will be slightly different from any other posts that I’ve done on Jay’s builds. This time I’ve asked Jay to take progress pictures and download them to the computer. Then I will interpret those pictures for you. This ought to be fun! Let’s go!

The first step that was taken on this jet was to work on the whale tail. No, that’s not the technical name for it. Technically it is called the horizontal stabilizer, but it’s my blog so I’m going to refer to it as the Whale Tail since that’s what it looks like to me.

Here we have one side of the WT (Whale Tail if you aren’t following…). The elevator has been taped to keep it perfectly inline. You see, the edge of the WT needs to be carved to give it the beautifully rounded shape that helps it to displace the air in an efficient way while in flight. By taping the elevator in place and shaping the edge around it you will make it easier to trim out the elevator later when you go to fly it.

Here is the other side so that you can see just how much really needs to come off of this edge. It’s not just a simple matter of rounding off some corners.

To begin you use a carving knife to roughly shape it in. I wouldn’t recommend using the same carving knife that you use on your Christmas turkey because that would be WAY too much carving. Instead you want to use a size more suitable for let’s say… a mourning dove.

After you have finished the carving you then use your sanding block to smooth and round everything out. Here you can see the difference between the expertly shaped tail and the other side of the tail that hasn’t yet been touched. Isn’t it beautiful?? 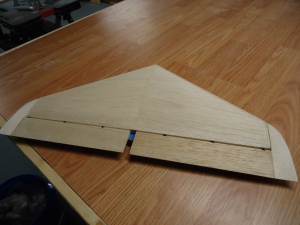 See… I told you that it looks like a whale tail!

Remember, Jay is the one taking the pictures and he’s not sitting here as I write up these blog posts. I’ve come across some pictures that I’m not really sure what they are, so you will also be getting my interpretation of those. For instance…

This is a bag of kindling that the manufacturer has included. I think that this was a very nice thing for them to do. After all, if you get frustrated because something isn’t working out, or you really mess something up good, here is some kindling to start a fire and burn the entire thing. That way the only thing left to clean up after the project has failed is a little bit of ash. You can then collect that and scatter it across your flying field in a ceremonious fashion. 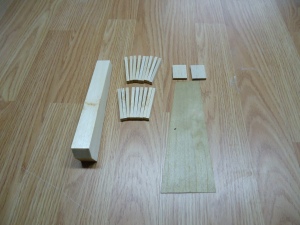 Or… maybe it’s for building the rudder. Hmm… it could go either way I guess. If you manage to make it to this point without having to burn the entire kit to put you out of your misery then you can go ahead and use these pieces to make the rudder.

Jay designed his own jig to help make it easier for him to assemble the rudder correctly. These matchsticks have to go at just the right angle and be decently spaced.

The jig puts the spine of the rudder right up against this board. Jay then marked out where the matchsticks would go on the rudder. To get the angle right where they would be attached to the spine he just had to put the matchstick on the line that he had drawn and could sand it down flat to the board. 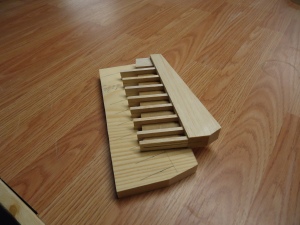 Once all of that was done and glued together he had a nice looking rudder.

After you have completed a big step of the project it’s nice to take a break. Here the A4 relaxes on his custom made stand and watches a football game.

In the next post we’ll see how the wings come together.