I have updated you regarding our bathroom progress. Have I mentioned how much I really enjoy that room now? Jay built the structure for the shelves in the linen closet so now I actually have my linens back in the closet! I have my living room back!! Woo-hoo!!

There have been some other updates, too. I’ll start with an older one… 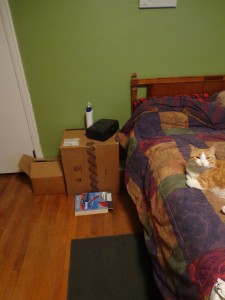 Even though Jay and I had to combine two separate households when we bought our house and moved in, we still lacked some things. One of them was a second night stand for his bedroom set. I had one night stand, but that went with the bedroom set that I brought with me. And the 70’s olive green really didn’t go with the bedroom suite that Jay owned. I thought that it should be easy to find another regular wood night stand.

I was wrong. So, in the meantime, I used this box. It worked! All that I needed was something to hold my alarm clock, glasses, and whatever other miscellaneous things I might have. As you can see, Chester didn’t seem to mind it.

Then my mother-in-law was cleaning out a spare room and came across this stand. I popped into her head and she knew that she had to bring it over for me. She wasn’t using it and she knew that I could put it to good use. It is so nice because I no longer have to worry about the box collapsing. Also, it looks a lot nicer. lol

Another feature that we’ve added is the stemware shelf in the kitchen. We had a LOT of stemware, but very little space. Jay made a shelf, and after I had stained it the same color as the bookshelves he made me for Christmas, he poly’d it and put it up. It looks so nice and I’m very happy with it! I no longer have wine glasses sitting on the counter taking up space. Woo-hoo!

I think that’s all I have to update you on for now. We are discussing the fact that we have to do something with our driveway (putting down more stone vs possibly cementing it), and then we have to insulate the outside walls. Unfortunately none of those really make for good blog posts. Now that it’s summer we are out flying more, too. I’ll have to remember to take my camera with me so that I can post about that.