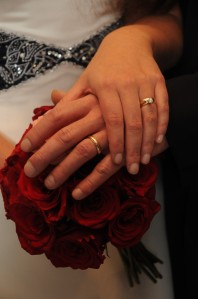 Technically it’s still Valentine’s Day as I’m writing this, so I feel that I should be allowed to post one more wedding/marriage related post. Then I promise that I will give you a bit of a break.

Today at work one of the ladies asked me where my flowers were. Other women were receiving arrangements and I guess that since I’m a newlywed that they figured I should be getting some, too. I told them that my flowers were at home on the counter, which was true. I then added that I had informed Jay to never send me flowers at work or even buy flowers from a florist. I’m just as happy with a bouquet from the grocery store as I am with ones that cost three times as much. I would rather have him save the extra money and instead use it to take me out for dinner.

As we were discussing things one of the ladies mentioned that she rarely sees her husband anymore. Now that their kids have left home her husband spends his time in the basement and she spends her time upstairs. They don’t even eat dinner together! Another lady has two teenaged boys and mentioned that she had gone out to dinner with her husband a few weeks ago, just the two of them. As they sat there, looking across the table at each other without a lot to say her husband speaks up and says, “So I guess that after the boys leave home we’ll probably end up getting divorced?” I’m not sure if she meant it in a humorous way or if her husband had been serious. Either way it’s a bit disturbing.

Perhaps Jay and I are being a bit naive. Maybe we shouldn’t really judge until we have kids of our own, but we are shocked at this kind of a life that married couples lead. Granted, we are trying to adapt to living together (it’s only been two months as of today!) and figuring out how to share our time together. We are trying to find that fine line between smothering and avoiding each other. There are times when we are both home, but in completely different parts of the house. We don’t usually stay that way, though. If I haven’t seen him in a while I will head down into the basement to spend a few minutes with him, or he’ll seek me out to see what I’m doing. Either way we are both making an effort to be with each other.

Before we could get married we had to have a counseling session with the Deacon at our Church and his wife. This couple was so sweet and we really had a good time chatting with them. One of the questions on our test that we had taken, Jay and I managed to answer it in the same way. This was unusual, the Deacon claimed, because apparently nobody ever answers it the same. It was a question regarding if you would put any children you had as a higher priority in your life than your spouse. Both Jay and I answered that we wouldn’t because even though the care of our children would be a high priority we also recognized that we couldn’t neglect each other. After all, once the kids grow up and leave home you still have to continue living with your spouse. I can’t imagine being married to somebody whom I don’t spend hardly any time with at all.

My parents don’t have the most romantic marriage, but they still manage to spend some time together. My mom is usually crocheting or knitting in the living room while watching TV with my dad, but at least they are in there together and communicating. This isn’t always the case since my mom likes to spend a lot of time in her sewing room, but it seems to work for them.

Am I out of line in my thinking? Are Jay and I congering up some pipe dream that isn’t attainable? I suppose that only time will tell, but I hope to be one of those old couples you see walking along still holding hands. I miss Jay terribly when he’s at work, but for now we have to deal with it because it pays the bills and makes life easier. I hope to always be eager to return home to him after a long day at work. I want to know that he’s missing me terribly if I have to go off on a trip without him. Just as I will miss him horribly if he goes to an event for a few days and I’m unable to go. I want to have that desire and need to see him for ever.

Do you think it’s possible? How do you view marriage after the children have left home?

This entry was posted in Marriage and tagged Marriage. Bookmark the permalink.