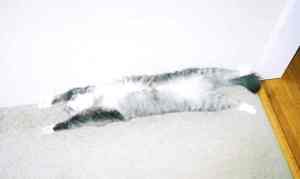 This is a picture of Bob sleeping. Yes, he was actually sleeping like this. I know… he’s a weird cat. What can I say? I was hoping that this picture would motivate me to stretch and reach for my goal. Hmmm…. yeah, it’s not really happening.

Well, I must be doing something right because in the first week I’ve managed to drop 3 pounds. Or it could just be a natural fluctuation of weight. Who knows. I did attempt to more closely watch what I ate and how much I ate. I stopped eating a snack at work in the morning, or if I just couldn’t make it until lunch I would grab the bag of carrots or celery from my lunch tote. I’ve also been trying to drink more water, which makes me have to pee more, which gets me my extra exercise by running back and forth to the bathroom.

Things were really hectic around here this week so I didn’t get to exercise like I had wanted. Despite that I definitely wasn’t sedentary for very long! This past weekend was a good example. We spent all day at a fun fly on Saturday, then Sunday was spent at the church’s Mardi Gras party. That night we also had a dinner party to attend where I spent some time milling around and talking with people. It was a LONG weekend!

Like I said before, I hate exercising for exercising’s sake. So I turned on the Wii and played a couple of games from the Sports disc and then I attempted to work out to the Gold’s Gym Dance Workout that I bought. What they don’t tell you about that video is it helps to have some kind of coordination to be successful. lol

Then my mother-in-law, Karen, gave me this Walk Away the Pounds DVD. Technically it looks like you’re supposed to do it every single day. HA! You say such funny things!

I thought that I would try it out so I did the ‘1 Mile Get Started’ workout. Okay, so it sounds hokey to be working out INSIDE to a walking DVD. I admit that I was skeptical. However, if this first taste is anything like the rest of the video then I think it will be a good one for me. It doesn’t have insane moves that I can’t keep up with, or just physically can’t do, and the woman isn’t annoying. If you’ve ever worked out to an instructional video then you know what I’m talking about. Either they are super peppy and high energy so you just want to hit them, or else they are telling you that you can keep doing it even though you lost all feeling in your legs five minutes ago. Karen bought us each a copy because her doctor wants her to lose weight and she doesn’t like to exercise alone. I can definitely understand that. I think that she will find this DVD to be enough of a workout that she should see some results. It’s not so overbearing that you give up out of frustration. Believe me, been there and done that!

So overall this first week has been good. I guess. I don’t feel like I’m missing or craving anything too much, so that’s a positive. I also don’t feel like I’m pushing myself to do something that is impossible and that I should just give up. Hopefully, this time, I’ll be able to achieve my goal of losing weight. Tune in next week to see if I’ve completely misplaced my workout DVD because I wasn’t using it. 😉