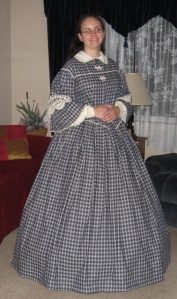 I know that today is supposed to be an intelligent post that imparts some Civil War knowledge to the masses who read this blog. Yes, all two of you. I have been busy, though, and have had some other fairly important things on my mind. Such as, what date should we set for our wedding? Should we rent or buy a house? Do I have enough savings left to buy a house? Do I want a glass of ice tea or the cranberry Diet Sierra Mist? You have no idea how difficult some of these questions are to answer!

Actually, maybe I can tie some of these into the Civil War. If anybody can do it, I can! During the Civil War you would ‘date’ a person for a couple of months and then decide to marry. Once your beau had asked for your dad’s permission to marry you, and it had been granted, then normally the wedding would follow within a few weeks. The family would get together, the bride and groom would wear their best clothes, and they would be married in the front parlor of the bride’s house. Afterwards there would be light refreshments, perhaps a cake or pie, and then after a little while they would run away to their new home.

Not that I want to get married in my living room, but it would be nice to not have to worry about planning a reception with all of the trappings. I don’t want the trappings. In fact, I don’t want the big reception. Yes, I would love to party and celebrate with the family and friends whom I love, but there are some people whom I wish could just send a card. It doesn’t even have to have money in it. Just a card because that means that they wouldn’t be able to attend. Don’t judge me, either. You know that you have at least one member of your family like that! It might be a distant cousin or a crazy aunt, but there is at least one person who immediately comes to mind.

Please allow me to completely change topics now. Here’s how you know that you’ve been steeping yourself in the Civil War way too much….

When I was in college I was trying to ask a friend if she had a sewing kit. I couldn’t come up with the term ‘sewing kit’, though. The only thing that kept coming to mind was the term ‘housewife’, which is what the Civil War soldiers called their sewing kits. When I mentioned this I was told that I needed help. lol Yes, I probably do. 🙂

This entry was posted in Civil War and tagged Civil War. Bookmark the permalink.