Prepping for the Air Show

It’s that time of year again! The model RC air show is coming up and we still have so many things to do. Jay has determined that he’s taking up three loads of planes. We are using his car, my car, and his mom’s car. She doesn’t know it yet, but he’s going to recruit it for hauling duty on Saturday. I’m sure that she will be fine with that. It will give her a chance to spend some time with us.

In the meantime I’ve been given a few tasks to do. My most important task seems to be keeping tabs on Jay and letting the guys in the club know about the information that Jay is putting together. Not an easy task when I only get to see him two out of seven days each week. I think that we’re doing pretty good, though. Jay typed up the itinerary, so now all I have to do is print it. And my job was to prep the paratroopers for their starring role in the candy drop. 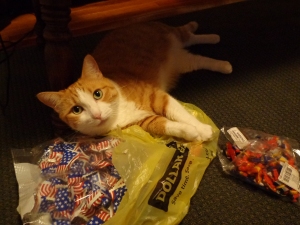 With Chester’s help I was able to make sure that I had everything I would need. This is Chester’s forte. She’s very good at supervising projects and letting you know when she has a comment or critique about them. 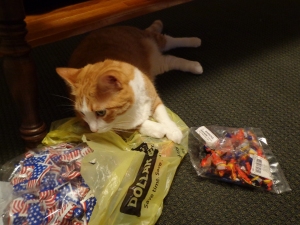 Time to do it? Check! 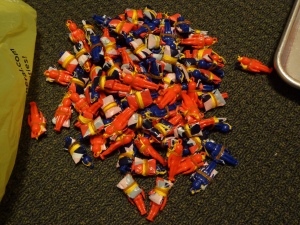 These are the little guys who will have candy strapped to them and then be dropped out of the airplanes so that the kids can run and grab them up. The problem is that a) we have to undo the parachutes because they are so tightly packed and wadded up that they would never come undone by themselves and b) You have to attempt to keep them from tangling. Last year we saw a kid walk by with about 6 of them all tangled together. 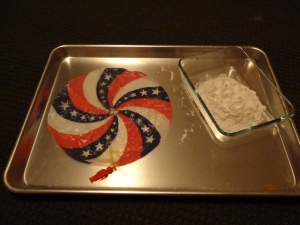 I am experimenting this year. I thought that maybe if I unfurl them, powder them, and then loosely wrap them back up that there would be a better chance of them opening. Short of teaching the little guys how to open their own chutes, I’m not sure what else we can do. Most candy drops at air shows the guys just dump out buckets of candy onto the air strip. We like doing this because it makes for a nicer demonstration and gives the kids a bit of a challenge. Last year they dove right into the field in order to get at them. lol 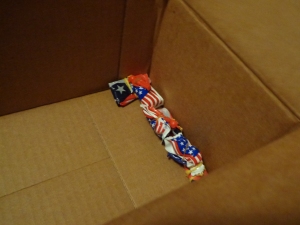 This is what it looked like after I had folded a couple. I tried to keep them neatly placed in the box. I know that it’s futile because they are going to get manhandled when being placed into the drop boxes for the planes. But I tried. 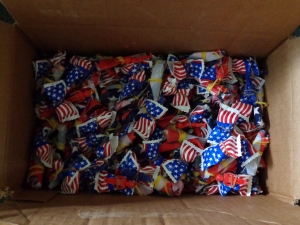 After two nights this is what it looked like when all of them were done. Except, Jay and I decided that we needed more, so I have a bunch more to get done this week. I am a glutton for punishment! lol

It will be worth it, though. The kids really enjoy it and it’s fun watching the ones that do open when they float down to the ground.

1 Response to Prepping for the Air Show