Back Deck and Outside Updates

This past weekend was a busy one! I had to take Monday and Tuesday off of work so that I could spend it with Jay. He’s on shut down right now so he has two weeks off of work. I wanted to take advantage of that, but due to a moron at work who had already requested that time off, I was only able to take three days total off. Anyway, I’m just now finding time to do some posting to my blog. Chester was trying to teach me that you need to take time to stop and smell the flowers. This is the glad that popped up in my side garden and she wanted to get a good sniff of it. Wasn’t it pretty? This afternoon I noticed that I have another one blooming. 🙂 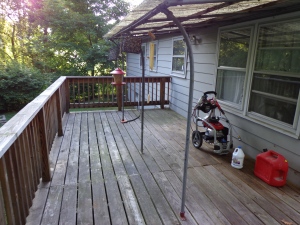 Since it was supposed to be nice, I had asked Jay if he could help me with a couple of projects around my house. The big one was power washing the deck. My dad built this deck for my grandma around seven years ago. In that time it had a lot of vegetation growing on it that I chopped off, and it didn’t get much sun. Needless to say, it looked like it was in a lot worse shape than my parents’ deck, which is about three years older.

It was looking old and weathered, plus it is starting to crack and just look icky. I know that the birds and the feeders on it doesn’t help, but that’s why I figured that it was time to clean and re-seal it.

I bought some deck wash, but we didn’t use it when power washing. We simply used water and I was amazed at what we managed to get off of the boards. It practically looks brand new! Tonight I was going to use the deck wash and get what little we might have missed, but after mowing my lawn my sinuses were not about to let me do much of anything else.

After power washing you’re supposed to let the deck dry for three days before applying the sealer. We are supposed to be getting some violent thunder storms over the next several days, so I figure that I’ll wait until it looks like we have another long stretch of sun then I’ll wash it once more and seal it. I’m just so pleased with how it looks right now. The cats aren’t happy because the feeders aren’t up. I had to move them until I’m completely done with the deck. I promised the cats that the birds will survive and will return once I put the feeders back in their usual spots.

The other project that I needed Jay’s help with was installing my new faucet. My old one dripped constantly and it was driving me crazy. I’ve had the new one for four months, but my dad didn’t have time to get over and fix it for me. I would have attempted to do it myself, but I didn’t have the right tools. Instead, I batted my eyes and asked Jay sweetly if he could do it for me. Without hesitation he agreed. Have I mentioned how lucky I am? lol 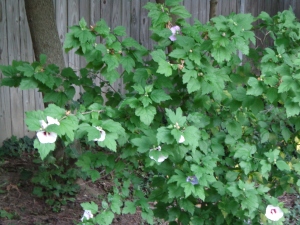 Several years ago my aunt had planted three or four Rose of Sharon bushes in one spot at my grandma’s house. They were different colors, but she didn’t tell my grandma. These bushes were shoots from my aunt’s house in Ohio. I didn’t expect it to bloom because it sits in the shady spot of my yard that doesn’t see any sun at all. Needless to say, I was surprised when I saw that I had quite a few blooms on it.

This is one of the white blooms. Isn’t it pretty?

And this is one of the purple blooms. On here it looks very similar to the white one, but I promise that it’s a light purple. It was hiding and didn’t want to come out, so I had to do a little coaxing. It makes me happy to find little spots of beauty in my yard.

That’s all for now. I’ll post pictures after I do some sealing on the deck. *sigh*