This weekend Jay took the A-10 up to the flying field to get some more flying time in on it. Unfortunately, I wasn’t there when he was flying, but I heard all about the four flights that it had that day. There was a point in one of the flights when the canopy flew off. It seems that the latch gave way, so that has to be worked on before it can go back up in the air. Would you like to see the damage?

You can’t see it very well, but there’s a mark on the top of the canopy where it smacked against the jet. It’s got a smudge on top. *sigh* 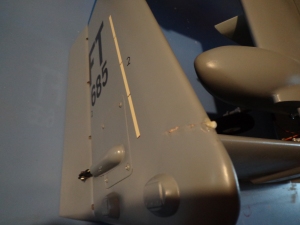 The only other damage, luckily enough, was on the tail. You can kind of see it here in this picture. The canopy hit the tail and the balsa didn’t stand a chance against the laws of physics. Jay says that it will be an easy fix and will look like brand new when he’s done. I completely believe him because I’ve seen his work. It’s beautiful.

It could have been a lot worse, so we’re thankful that this was the only damage that was done. This has to last until eJets in September and I will be a bit nervous about flying it until that point. It’s a good thing that I am not expected to fly this one!