It has been a while since I last updated you on the build of this plane. Unfortunately, May has been a very busy month for me and I have not been taking pictures like I should. Needless to say, in my absence, this plane has been completed. In fact, I saw it fly today and it looked gorgeous! It had such a nice sound to it. Is it sad that I’m now complimenting the sounds of planes?? lol

This is what it looked like during the third week of this build. It was ready for covering and we were trying to figure out the color scheme.

Here it is completed and covered. Isn’t that a beautiful plane? The retracts work perfectly, too. Jay had to do a bit of redesigning to fit them in because the plans originally called for fixed gear. But let’s be honest, some planes just look silly flying about with their gear down.

For some reason I must have really liked the tail on this plane. I had taken this picture before it was covered.

And here it is covered. I love the American flag detail. Did you notice that Jay used my lucky number, too? Isn’t he so sweet to me? 😉

Here’s a view from above so that you can see the color scheme on the wings. That is really sharp looking, don’t you think? 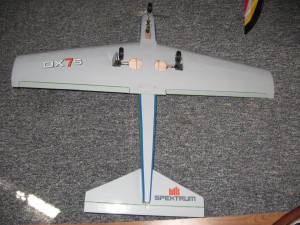 The bottom of the Kobra. It’s got such a stark contrast because that way you shouldn’t lose orientation when flying. Maybe. Give me a chance and I bet that I could!

Here is Jay, hooking up the battery to prepare it for the only flight that it managed to get in today. This was the first time I had seen it fly and I was impressed. There were other guys there who were taken aback by it as well. They recognized the aircraft right away and it really brought back some memories for them. Everybody enjoyed watching it fly!