*WARNING – Major gushing ahead. Please wear protective eyewear to prevent blindness from the beaming light emanating from my being when I talk about Jay. Also, a bucket may be needed to catch your vomit after having to hear, yet again, how wonderful I think Jay is. Once all safety precautions have been taken you may proceed on with your reading of this post. Thank you. *

This past weekend my time to spend with Jay was annoyingly decreased by the fact that his company insisted he attend an all day safety training on Saturday. I said some very unlady-like things regarding their demand on his time when they already have him working extended shifts (since August!) and they steal part of his weekend away from him almost every week. Despite this annoyance, we managed to survive. Barely. 😉

I didn’t get to have Jay all to myself, though, when I finally was able to be with him. I had to share him with Dave-the-Marine. It was okay. Dave is a great guy and he cracked me up. He entertained me with stories of the amazing things that Jay can do with R/C planes. As Dave and I were chatting, Jay was finishing up some things on the jets that Dave had paid him to build.

This is the Panther that Jay has had in his basement for a few months. Dave-the-Marine lives about 6 hours away, so he can’t just come over and pick it up. It’s always nice to visit with friends, anyway. Saturday night I listened to Cliff and Dave catch up. Then I enjoyed listening to Jay as he told Dave about some of the things that have happened to various members of the group as they were flying. One of the stories being about Jay’s F-16 that he sliced in half with the power line on Labor Day. lol

I was trying to be inconspicuous and take pictures when the guys weren’t looking, but at one point Jay caught me. lol. Here he is making some last minute tweaks to the wires and connections. Jay loves being elbow-deep in a jet and I love watching him. What is fascinating for me is to see the respect that he gets from all of these guys when it comes to his knowledge about the planes and how to get the best performance out of them. It really does fill me with such a feeling of pride, which is probably silly since I’m just the girlfriend, but it does. 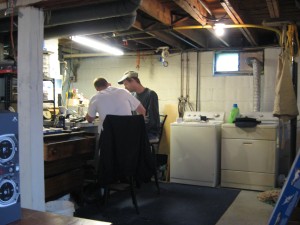 Part of the visit was to show Dave how to use the new radio that he purchased. It’s been a few years since he’s really done much flying and this technology is a lot newer than what he was used to. The Spektrum radio has all kinds of features, buttons and cool little doo-dads, so since Jay has this brand he was teaching Dave how to bind his planes, do the trimming, and other various programming that needs to be done. And if you’re wondering, Futaba sucks. 😉

Still learning the radio… it’s very complicated. It would take me a long while to really learn it because I would be confused by the various mixings and settings and buttons. My luck I would hit something thinking that I was putting the landing gear down, and instead my elevators would go full out and I would crash my plane. *sigh*

Here is the Cougar that Dave mostly built. He just needed Jay to help him with a few minor things. I think that it turned out really nice, don’t you? Dave, you did a good job!

There was already a discussion about the next plane that Jay will build for Dave. It will be a while before he needs it, though, because he will get a lot of use out of his Panther and Cougar first. Jay doesn’t mind doing this kind of thing because he loves assembling the planes almost as much as he loves flying them. And I love watching him do both. He really is a very talented guy with many skills. If you think that I’m joking, then wait until I tell you about what a great job he did of fixing the toilet. It flushes completely and doesn’t take forever to refill! I was VERY impressed and happy with that project this weekend. It really doesn’t take much to make me happy. Just being with Jay does it for me. 🙂