I am having a WILD and CRAZY Friday night! Woo-hoo!! I’ve spent the last four hours balancing my check book and washing laundry because Chester is puking a lot lately. Fun, eh?

I’m probably one of the few people who actually still balance their check book. My sister keeps an eye on the balance via the computer, but I still like to make sure that my numbers match what the credit union says that I have in there. Is it the accountant in me? More than likely it is. Since buying the house and working on it I haven’t taken the time to balance anything. Needless to say, I’ve had to do some catching up. It has lightened up my purse, though. Every time I use my debit card I keep the receipt and once I balance my check book for the month it gets stapled to my statement. Again, I’m an accountant. What do you expect? lol

Are you wondering why I’m spending my Friday night balancing my check book? It’s because my dearest Mr. Hot Stuff has an all day training tomorrow, starting at 8 a.m., so he didn’t think that it made sense for me to go over to his house after work. It’s a 55 minute drive for me and he didn’t want me sitting around his house by myself tomorrow while he’s at the training. I haven’t seen him since Sunday, though, so I’m really missing him bad right now. This is the first weekend in quite a while that we haven’t seen each other starting Friday night. *sigh* It’s okay. I haven’t let the tears short out my keyboard. Of course, Bob isn’t happy that I’m using his tail to wipe them away.

I had a strange dream that woke me up last night with my heart racing and the desire to hug Jay tight so that the bad thoughts would go away. I’m still not sure what was going on, but in the dream we were visiting my parents. Jay had gone outside to smoke and I was playing with the cats in the living room. My mom had taken the dogs outside or something and she suddenly started yelling for my dad. He was in the bathroom, though, so I went to see what was going on. Jay was looking at something from his spot on the deck so I went out to see what he was looking at (whatever it was, that’s what my mom was freaking out about). As I walked up to him we heard some noise from the woods on the right and before I knew it Jay was shoving me to the ground and telling me to get down. He then threw himself over me to protect me, and all that I could see was a little bit, but I saw this guy run out with a pack of dogs and a rifle. I don’t know why Jay didn’t want him to see us, but he was after something that had run across the back yard. I didn’t know if the guy was a threat or if the thing he was after was the threat, but either way I was scared. That’s when I woke up. If I’m at Jay’s and I have a bad dream I can usually just hug him tight and that makes me feel better. Even if he laughs at me when I tell him what the dream was about.

Can I ask a silly question? What is it with the sudden need for people to take off and have extravagant bachelor/bachelorette parties? I’ve heard of people going to Vegas, the beach, the mountains, etc for an entire weekend-long party. I don’t understand it. I know that your best man/maid of honor are the ones who are supposed to organize and pay for it, but is that really fair to them? I wouldn’t want my sister or Pauline (they are going to be my only bridesmaids… if I get married) taking on that kind of expense for me. I would much rather have them spend it on themselves or the dress that they have to buy. Maybe I’m just not the party girl type, so that type of event doesn’t hold any kind of appeal to me. In fact, if I ever get married I would be completely fine if I didn’t have a bachelorette party at all. My idea of a good time is going with my friends to get pedicures and then maybe heading somewhere that had a gluten free menu so that I could enjoy a nice lunch that didn’t consist of a salad. 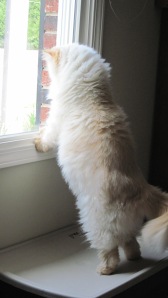 I don’t have much else to say. I just wanted to leave you with a smile on your face, so I added a picture of Joey. Isn’t he adorable?? 🙂