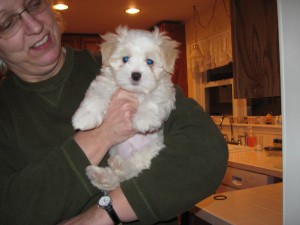 A few weeks ago while I was visiting at my parents’ house, my mom came home with a new puppy. My dad wasn’t too impressed because Buford, my mom’s Yorkie, was not known for getting along with other dogs. In fact, the last two dogs that my mom rescued we had to find homes for them because Buford tried to rip them apart. This most recent puppy was another rescue. I don’t recall the entire story, all I know is that the puppy was being abused by some lady’s kids so my mom said that she would take him. We aren’t sure what breed he is, but to me he looks like a cross between a Maltese and a Cocker Spaniel. He’s a character, though, that’s for sure!

My mother claims that his name is ‘Benny’ (as in Benny and the Jets by Elton John), but I think that he looks like a Roscoe. So that’s what I call him. Our animals are used to having more than one name so it’s not a big deal. And I’m not sure what Buford’s (her real name is Annabelle) deal is, but she actually likes this puppy. I guess that they get along great and she hasn’t tried to kill him at all.

I’m not a dog person, but I have to admit that Roscoe is pretty darn cute. He’s not too bad, either. He is in that chewing stage that all puppies go through, but he’s not tearing into everything in sight. Also, he keeps Buford entertained and busy so that makes my mom happy.

I don’t blame my mom for rescuing him, either. I can’t stand to hear that people can hurt an animal at all, let alone such a little defenseless one. That’s how we acquired my sister’s cat, Joey. The people who had him were abusing him, too. So we take them in and spoil the snot out of them. lol

This entry was posted in Uncategorized and tagged dogs. Bookmark the permalink.