A new project is underway! Due to the fact that a lot of the stuff left to do on the Warthog is detail work, Jay has decided to start tackling some projects in his To Be Built pile. He asked for the SIG Kobra Airplane kit for Christmas. This kit was special to him because it was the first airplane that he built himself, and then he had assembled it a few more times over the years. This time he has decided to modify it for an electric motor instead of the gas engine that he had in the past (and that the kit is made to house). There are many guys who prefer to buy RTF kits (Ready To Fly) because they want to be able to take it out of the box, bind it to their radio, and then fly it. Not Jay, which is one of the reasons why I love him. Why be typical? If you’re going to have something, then make it your own and modify it as you see fit.

This kit is just that… a kit. The box is full of balsa wood pieces that you have to cut apart. 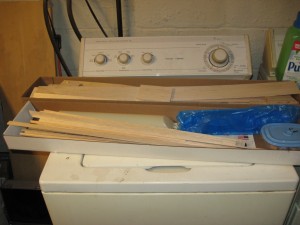 This kind of reminds me of a sewing pattern, except there isn’t a pattern to cut. It’s just the material. I almost expect to see lengthening lines or dart lines running through them. lol

If you can believe it, this wood will be assembled to look something like:

I have been told that I’m allowed to pick out the colors for the plane. However, Miami Dolphins aqua and orange have not been a crowd pleaser. lol

While I was off having fun visiting my friend and doing her taxes, Jay was busy. Using the plans that come in the kit he started to assemble the skeletal wings.

You can see the plans that come with the kit, and on which he is building the wings. This helps to keep everything uniform and going where it’s supposed to.

Here are both wings put together:

I think that it’s a neat process and I look forward to seeing it come together!

This entry was posted in RC Planes and tagged Kobra, RC Planes. Bookmark the permalink.

2 Responses to The Kobra Project – Week 1