Yeah!!! I finally did it! I’m not going to jinx myself, but please enjoy MY pictures. 🙂

There has been a lot of progress on the Warthog, but not a whole lot of it is able to be captured on a picture. A lot of the wiring has been done and tested. Now the process of priming the plane has begun. Here are a couple of the flaps:

No, they aren’t different colors. There was a shadow being cast over these parts. Would you like to see what it is that is casting the shadow?

This is a jet that Jay has assembled for his friend Dave-the-Marine. This is a Panther… I think. There’s another one similar that is a Cougar. I remember the names because they are cats. I don’t remember which plane they belong to. lol. I just think of this as the Kitty jet. (Jay’s going to roll his eyes when he reads that!)

Finally, because Jay was a good boy this year he received a new jet for Christmas. Two weeks ago he came over to my place and spent the entire weekend assembling it. I know that he’s itching to give it a test fly. This one is a Concept. I do know that one! lol 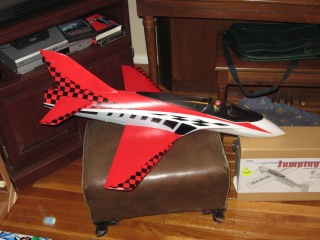 Isn’t it pretty??! Speaking of pretty, feast your eyes upon this:

That’s right ladies! Look at that handsome hunk of a man. And he’s all mine, so keep your mitts to yourself. lol 🙂