I hope you all had an enjoyable Christmas. With any kind of luck the family get-togethers were fun and not stressful. I took some pictures from my Christmas, although I just realized that I didn’t get any of me, Jay or his family. I’m not much of a shutterbug, so I hope that I can be forgiven. It never occurs to me that I should take a picture until after the moment has happened.

I am lucky enough to have some gift wrapping specialists at my house. This year Chester helped me. Her job was to make sure that I had correctly wrapped the gifts and put them into structurally-sound packaging.

Apparently this was VERY tiring work.

A lot of people measure the success of their Christmas by the number of expensive gifts that they received. I measure it by the enjoyment of the company. In my case, it was a VERY good Christmas. I attended Jay’s family events with him and had a very good time at all of them. I grew up with a large family and since the feud I have missed being part of the larger gatherings. Jay comes from a rather large family so I managed to get a healthy dose of that on Christmas Eve. We had brunch with his mom on Christmas morning where his aunt, uncle, some cousins and his grandma were all there. Then it was off to my house to have Christmas with my parents, my aunt Dianne, and my sister. Oh, and the Gift Inspector (who took his job very seriously):

One never can be too careful!

Jay really spoiled me, though. He gave me Glenn Beck’s recent book, “Being George Washington” even though I know that he doesn’t care for Glenn at all. Jay tried to outdo himself, too, by giving me a Kindle Fire and an iPod Nano. Both gifts which I have been faithfully playing with ever since. No matter how much I love my Kindle and iPod, though, neither of these are cherished as much as the wine rack that he made for me. 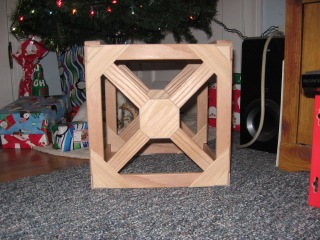 Isn’t it beautiful?! It’s made out of oak and he did such a great job on it. The joints are perfectly joined. The decorative pieces were beautifully done. The fact that he spent time making me something really is what makes this one of the best gifts he could have given to me. I didn’t know that I needed a wine rack, but now that it’s mine I wouldn’t give it up. 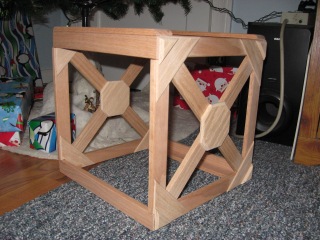 I wish that you could see it in person. It takes a lot of talent to be able to put something like this together. I have some experience working with tools, but I could never do anything like this. We all have our talents, though, and this is Jay’s. Well, besides his plane modification talents. I put two coats of poly on this and then stored the bottles of wine that I received as another gift at his mom’s. 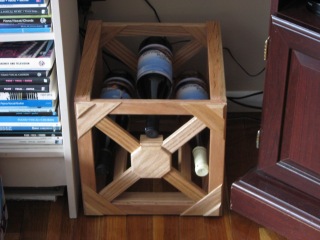 While I’m on the topic of home made gifts, do you mind if I do a little showing off? I gave Jay’s mom a piece that I had stitched a while back. I did it using some silk floss that I loved and a pattern that I had bought because I wanted to stitch it, but had no idea who I was stitching it for. Here is what the finished cross stitch piece looked like:

The floss used for the saying is variegated, so that’s why it is different shades of purple. It’s not your eyes. I really liked this piece and decided that Jay’s mom needed it for Christmas. I needed just the right frame and mat for it, though. When framing my pieces I’m kind of picky. It has to be just right or else I’m not happy with it. I wasn’t too thrilled with the frame at first, but once I had it all together I was pleased as punch. What do you think?