Hello and welcome back! I have returned to the hangar where our A-10 Warthog is being built. If you remember last week we talked to the General who was in charge of the project. I have here with me somebody new who will be chatting with us each week. This is Master Chief Smith (and he definitely qualifies as some major eye candy!) 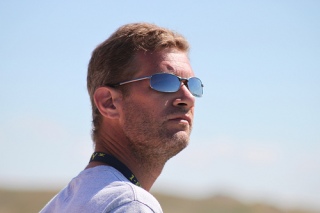 Me: Master Chief Smith, can I ask you what happened to the General and why we are talking about the Warthog with you?

MC Smith: Yes, ma’am, you may ask me that. In the last week it has been decided that this particular aircraft will be used for a special project that only the Navy is good enough to carry out. When that decision was made I was put in charge of it and will be guiding the rest of the construction on this particular jet.

Me: I didn’t realize that the Navy could take over a project that had originally been designated to the Air Force.

MC Smith: This is the US Military, ma’am. We don’t ask why. We just follow orders.

Me: Okay. That’s good enough for me. So, MC Smith, can you tell me what developments have been made since last week when I talked with the General?

MC Smith: I’m not sure what the General might have told you last week, but I know for sure that we have smoothed out the belly of the aircraft. This is what the belly looked like before:

You can see the piece under the wings that needs to be melded onto the wing itself. This is an exacting process and is very difficult to do so that it looks nice. I can proudly announce that it now looks like one piece without any imperfections at all. 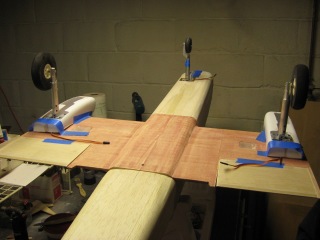 Me: You’re right! You can’t tell that the underbelly was separate from the wing. I can’t see a seam at all. What beautiful work!

MC Smith: Yes, it is. I’m very proud of that accomplishment. In this picture you can see that we also worked on the fairings.

MC Smith: The fairings. You know, what the landing gear gets tucked into under the wing.

Me: Oh! You mean the slippers!

MC Smith: Yes, the ‘slippers’. We had to cut out enough of the fair… I mean, slippers, so that the wheel would tuck in without catching on anything. There’s still a little bit of work to do on these, but they are just about right.

Me: Those also look nice! The landing gear looks great, as well. Are they standard Navy issued landing gear?

MC Smith: No, ma’am, those are not. Those are custom designed landing gear for this aircraft. I can’t tell you what makes them custom, but we had our very best designer working on them.

MC Smith: There’s still some work left to be done on them, but when they are finished they will definitely get the job done. The nose gear has a little more work than the rest of them, but when all is said and done it will be worth it.

Me: That seems like a lot to get done this week. How did you manage to do it all?

MC Smith: It wasn’t easy, but the great thing is that we managed to get a little more accomplished. For instance, the engines arrived the other day so we went ahead and installed them.

Me: Ooooo!!! Those look great!

MC Smith: Yes, they do. And finally we did some assembling of the electronic components. We had to create our own plug, though, because it was too costly to order a ready-made one.

Me: Can I see the plug up close a little better?

Me: You know, I have no idea what that does or what it’s supposed to look like, but it looks good to me!

MC Smith: Thanks, I appreciate the compliment. As of today, that’s all we’ve had time to do. Things seem to get busier at this time of year.

Me: Yes, they do. Thank you so much for taking the time to chat with us, Master Chief Smith. I appreciate your time. Well, that’s it folks. Nothing very exciting this week unless you like landing gear. It’s sparkly, so it captures my attention. lol. Have a great week and I will meet you back here next Sunday!