The 12 hour shifts are starting to catch up with us. Between working and sleeping, it doesn’t leave much time for anything else. However, a little progress has been made. Jay was busy this week in his spare time. Do you remember how the wing spars looked last weekend?

This week the delicate procedure of actually inserting it into the wing commenced. Now, keep in mind, once everything is done the jet and wings will be glassed so you won’t see any of the ‘ugly’ patches. Here’s the installed spar:

I think that it looks really good. It looks a lot better than what I could have done! This morning the left wing spar was installed. This is really tough because you need to make sure that everything lines up perfectly! I keep telling Jay that he’s damn good, but I don’t think he believes me. 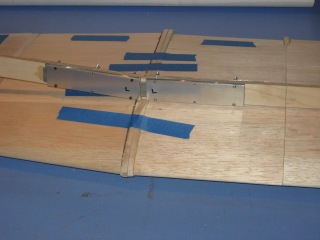 A wing spar this weekend: 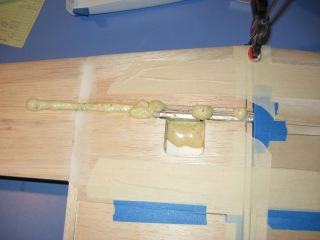 The bubbled-up stuff is glue that will be cleaned up once everything has fully set.

The other thing that was worked on this weekend was the tail thing. Now, Jay will laugh at my description and so I’m partially doing this for his reaction, but the other part is that I don’t want to start tossing terms out there thinking that I’m right and then finding out later I was completely wrong! lol. Also, I’m not sure how to spell most of the words. 😉

So, this is what the tail thing looked like last weekend:

The blue tape was holding the steering devices onto the tail thing. These were hinged today:

Don’t they look so much prettier?? I like blue, but the tape wouldn’t make a good hinge for the steering device.

The last thing that was worked on this week were the shoes. Okay, so that’s not the proper term for them. They are canoes or something like that (I’m a bit tired so not sure if I’m remembering correctly). Either way, they look like shoes to me. lol. They go on the wings:

Don’t they look like slippers?? I think so. :-p

What else was accomplished? LOTS. Here’s a shelf that was put together in order to get some kind of organization done in the man cave:

The other thing that was built was a new toolbench caddy thing:

Isn’t it cute? I think so. Well, that’s all for the Warthog project this week!