I believe that I might have posted a time or two about the very handsome guy whom I’ve been dating. The one who used to fly planes in the Navy; is still a certified flight instructor; is a parachute jumping instructor (whatever the technical name for that is besides “Insane”); and who loves to build and fly remote control aircraft. If that still isn’t ringing a bell, maybe this picture will (yes, I need new pictures…): 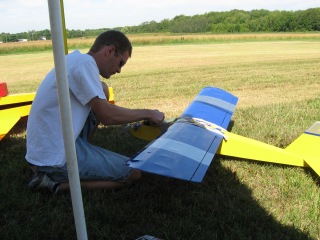 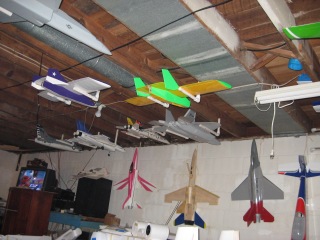 That is actually his basement workshop. Considering the number of jets that he has I have to say that I’m quite impressed with how he manages to store them. He builds his own storage units out of PVC pipe so it’s relatively inexpensive. Of course, I won’t tell you that some of those jets hanging on the inexpensive PVC are easily worth $500+. Nope. It’s not a cheap hobby, but I would rather see the money being spent on that than on drugs, gambling or alcohol. Call me picky…. lol 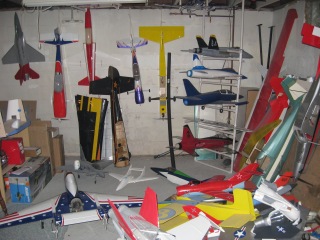 This picture is a little messier, but still has some organizational elements to it. You will notice the beautiful PVC shelf in the corner. There is Jay’s new Bobcat in the bottom left hand corner. The yellow one hanging on the wall is the plane that he was getting ready to fly in the picture at the beginning of this post. The red one on the bottom of the PVC pipe shelf is his ‘Fabu’ (fake Habu) with which he showed up some pretentious guys at eJets that he could fly just as well, if not better, than they could with his plane that cost a fraction of what theirs cost. The second one down on the shelf (the white one, under the gray one) he took to eJets, as well. This one he holds the record for number of times skipped on the runway during landing. That jet doesn’t have landing gear, so you have to land it on its belly. I can’t recall how many skips he got out of it, but other guys spent all weekend trying to beat him and never did. lol

Where planes go to die: 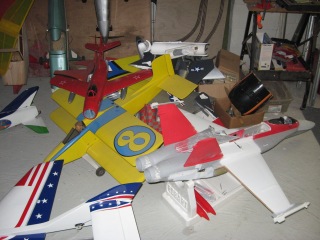 This is the dead pile. These need to be cannibalized for whatever can be salvaged, and then they get junked.

Finally, have you ever wondered what would happen if you hit an overhead wire with your Styrofoam jet? 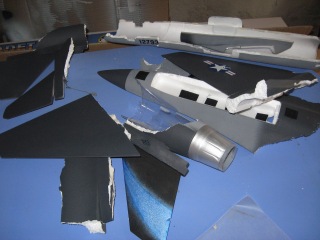 This was a one-in-a-million hit. It was Labor Day weekend and we had gone out to his family’s camp for a picnic and fun. Part of the fun always includes Jay taking one of his jets and the family watching him fly it. This actually made me sad because this was the jet that Jay was working on when we started dating. I saw it from the beginning… and I was there for the end. This was quite the speedy little jet. He was doing fancy rolls and turns with it, and went under the power line. The jet had only been in the air for maybe a minute, if that, when he went under the power line and pulled up just a little too soon. It happened so fast! One moment there was a jet, and the next it was just a bunch of pieces flying in all different directions! Jay managed to hit the line on the end of the jet’s nose almost perfectly! The line cut the jet in half (including the electric fan!) and did a spectacular job of destroying it. When I saw it my heart sank! I looked over at Jay… and saw him jumping up and down in excitement!! He’s a realist and knows that you’re going to destroy your planes. That’s just how it is. However, he believes that if you’re going to do something then do it in a spectacular fashion, and by god he did! He was so proud of that one. I was amazed. Everybody felt terrible about it, but he just waved it off. It wasn’t the first one that he crashed this year. lol

Anyway, thank you for putting up with my bragging again. I will try to vary my topics a little. 🙂