The A-10 Warthog Project 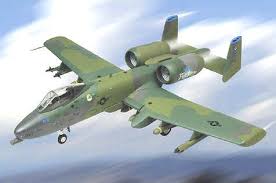 The A-10 Warthog. A jet that is so ugly that it’s cute. Your first reaction to it is, man, that’s ugly! It’s almost as if a regular jet suddenly had two growths spurting from its backside, but it’s hoping that nobody else notices. Like the old person with the huge goiter protruding from their neck. If they act like it’s not there then nobody else will notice. I just want to go up to it and say, “Mr. Warthog, I hate to inform you of this, but you have two giant tumors protruding from your behind. You might want to get a doctor to look at it.” lol

Well, my Dearest has decided that this will be his winter project. He ordered a kit that he has to build himself and it arrived this past week. The box was huge! And it was full of styrofoam pieces. That’s it. Just foam. Can you imagine?? He was happy, though, and that’s all that matters. This is what a box of Warthog-shaped foam looks like:

You can’t tell, but this is going to be HUGE. I can’t recall the dimensions, but I’m thinking that when it is all said and done it will have to be close to 5′ long. Not only do you have to glue the pieces together, but there is a LOT of building to it. You cover it in wood and then assemble the electronic parts together (at least, I think so… I’m just an observer. I’m still getting this whole plane thing down). Here is the beginning pile of wood (I’m told that when it’s all assembled that there will be a LOT more wood than this):

Here is the progress on this project after the first weekend working on it.

You can’t see all of the hard work that Jay has put into it. He spent a lot of time lining the inside of it with balsa wood, plus other parts of the jet.

Can you see the wood that is lining the inside?  All of the blue tape is holding the parts of the jet together while the epoxy dries.

Here is another picture of parts that Jay managed to get lined with wood:

He told me what those parts were called. The vertical something or another… I think… lol. To all of you non-aeronautic people it’s one of the parts that are on the tail of the jet and helps to steer the jet in various directions.

While I’m bragging on my pilot I would like to show off a few more things that he has designed and made himself. Jay makes his own fiberglass housings for his modified fans. Again, if you have no idea what that is, this is what it looks like:

The white round part is the fiberglass housing that Jay designed. In fact, he showed me how to make them, too. Can you see the bracket, there? He designed that as well. 🙂 (He’s really smart when it comes to this type of thing). Would you like to see a close up?

Okay, so if you’re a girl it probably doesn’t look very impressive. However, if you’re into RC planes or jets then you’re really impressed with this. Especially when you find out how little it will cost for one of Jay’s creations instead of buying from a hobby shop. Jay has had a lot of interest in both his fans and the brackets. Apparently he’s sold some of each and I told him that I thought he should get some kind of recognition. Now, most of these will either be painted over or hidden in some way, but I designed a logo of sorts for Jay to use. I cross stitch it on evenweave and then he includes it in the manufacturing of the fiberglass bracket. This is what the first one looked like:

We’ve done a bit of modification to the cut-out (round instead of square), but this way I feel that at least he will be putting his signature on it in some way. What do you think?