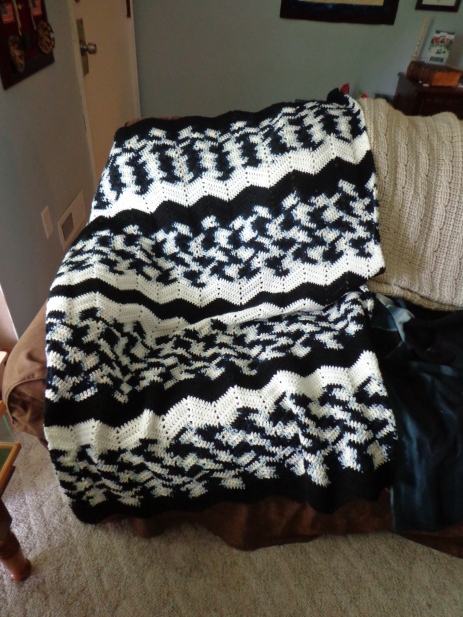 I have to admit something to you. This is the first Project Linus blanket that I’ve disliked the entire time I was working on it, and almost detested it by the time that it was finished. That seems a bit odd, doesn’t it? The fault can be laid squarely at the feet of the variegated yarn that I used. Here’s a picture from the last post to remind you: 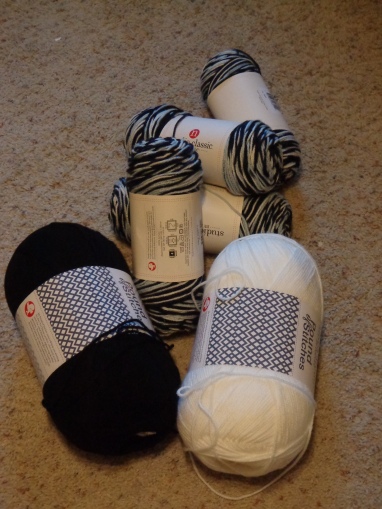 I used Stitch Studio Classic by Nicole (A.C. Moore’s brand of yarn) which I normally LOVE. In fact, the Sky Mix used in the last blanket was this exact same brand. I’m not sure what happened with this yarn (color name is Black Multi), but it felt like I was using Red Heart Super Saver. Not that there’s anything wrong with that, but usually the stuff by Nicole is a LOT softer. So I wasn’t happy with how it felt. There was an even bigger issue, though. I was having a Blue/White Dress issue with this yarn. Do you remember the Blue/White Dress controversy?

This is the dress that some people saw as White/Gold and others saw it as Blue/Black. (I saw it as White/Gold). Well, every time I looked at this stupid yarn I either saw it as a black/gray/white or else I saw it as black/blues/white. Seriously?!

I can’t even begin to tell you how many hours I sat and stared at this yarn to figure out what color it was exactly.

Does it have blue in it:

Or does it have gray in it:

It would change depending on what light it was in. In fact, I had spent a LOT of time searching for a really dark navy to go with this yarn. When I started the previous blanket I had originally planned to use the Black Multi instead of the Sky Mix (which was really a much better choice). After I had done my initial band of dark blue I started with the Black Multi and stopped. There didn’t appear to be a bit of blue in it when stitched next to the solid dark blue. It looked odd. So I swapped it out. That’s why I went with the white and black bands for this blanket. Yet, now it looks odd with those colors. *sigh*

I just can’t win. I’m leaving it because the blanket is done and I don’t want to be bothered with it any more. It is what it is.