A few posts ago I mentioned that this year is the year of Crochet.

Somehow I have managed to accumulate a handful of WIPs (Works In Progress) that are beginning to drive me crazy. Let me show you what I mean. 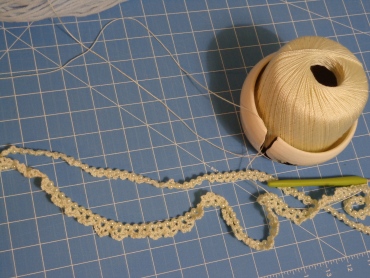 I am currently on the last row of my second 10ft section of garland. Of course, once that is finished I need to start on another 10ft section in the hopes of having it ready for the tree this upcoming Christmas.

This project has not been touched since I last posted. Mainly because my wrist is finally somewhat healed and I don’t want to injure it again. What I need to do is put the wrist brace on that I wear at night (it immobilizes the wrist) and see if I can manipulate the hook enough to work on this project. I need to figure something out!

I don’t want to ruin the big reveal so here’s a sneak peak at the next blanket. The color isn’t good (it’s a bit yellow), but you can see a little bit of what I’m doing. This blanket gets worked on when I’m sitting in the family room watching TV. That is, when I don’t have a cat on my lap.

One of my next sewing projects will be to make some kind of an ‘envelope’ of sorts that I can place the already made blanket in to protect it from cat hair while I work on it. Since these blankets go to other people I try my hardest to remove all of the cat hair before handing them into the collection site. That includes using a lint roller and going over every square inch of it after it has been laundered. Unfortunately, all you have to do is look at Chester and you’re covered in orange cat hair. Look down… just by reading these words I’m sure she’s managed to shed on you.

I have a magazine with about a dozen projects that I want to try making (one of which is the rug above). They had this baby blanket that used Lion Brand Ice Cream Big Scoop Yarn and looked really cute. I finally ran into a yarn sale where I could get this yarn at a really good price. Since it will be for a boy I chose the color ‘Blueberry’ and I think it’s cute. 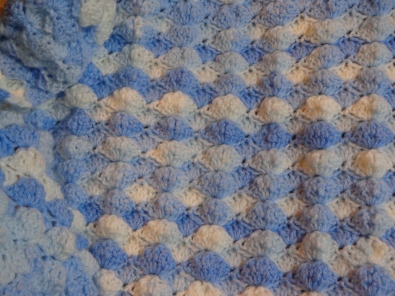 Every other row is a bubble shell stitch, and you fill in between on the next row with a fan of double crochet. I work on this project in the front living room, typically in the morning when drinking coffee before work. My only complaint about this project is that the skein of yarn isn’t pulling nicely. I tried putting it in my project bag, but it refused to pull from the center. It got all knotted and I ended up taking it out to use. I think it’s just because it had to be squished to fit into the bag.

I do have one finish to show. I received some kitchen towels for Christmas and decided that I didn’t need any more towels in my drawer. So I turned them into hanging towels.

This is the first set that I did (and sent to my best friend). I have worked on a second set for myself, but still need to weave in the ends and add the buttons. The buttons that I used for this set were really cute. I think that I might have purchased them at Hobby Lobby a few years ago:

Speaking of Hobby Lobby, Jay and I were there the other day while waiting for the dealership to finish the inspection on his car. I was just walking through the yarn aisle when I felt a thump in the basket I was carrying. I looked to find that a Project Linus blanket had jumped into my basket!

I already have eight blankets kitted up at home, so I definitely did not need another. I explained that to the yarn, but it cried and said how it just wanted a nice little boy to love and cherish it. *sigh* Well, since I’m such a softy I couldn’t say no, so it came home with me. I guess that I now have nine blankets ready to go.

Finally, not that I need any more projects on the list, but I saw this and am DYING to buy the pattern to make one: 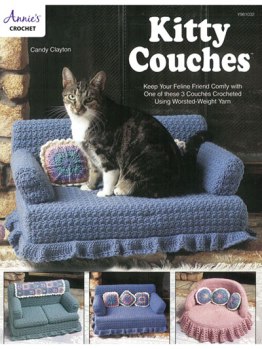 How stinkin’ cute is that?! Annie’s Craft Store was kind enough to send that to my email the other day. I definitely don’t need yet another project waiting in the wings, but I’m so tempted! I know, though, that if I were to spend the money and time making it that the cats would refuse to use it. Currently Chester’s favorite place to sleep is a piece of packing paper from a package that I received a few weeks ago. I tossed the paper on the floor and she claimed it. So I know that this would be completely ignored! Silly cats.