This is what our house looked like when we first bought it. Actually, I’m not sure when this picture was taken because I know the first spring that we lived here I thinned out the front flower bed a LOT. This was definitely taken in the spring before everything really started to grow.

You can’t really tell from this picture, but the front porch was causing us some trouble. It’s a concrete pad on top of concrete blocks, but the pad had sunk towards the house so when it rained the water headed towards the house. Also, there was enough of a gap that critters were able to get into the house via this entrance. I tried spraying Great Stuff in the crack, but the mice chew through it with very little effort. 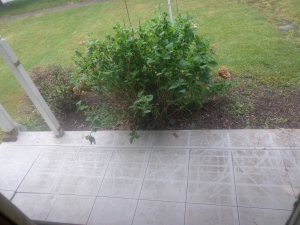 We wanted to get this done last year, but our concrete guy couldn’t fit us in. This year we were #3 on his list. He came over Wednesday night and scored the porch so that it would be easier to remove the next day. Let me tell you what… that guy worked his tail off! They were there until 9:30 Thursday night fixing the base and getting things ready for concrete in the morning.

The first guy showed up at 5:30 Friday morning, with the rest of the crew following shortly after. They had a few more things to do before the concrete truck arrived at 6:30. I’m sure that the neighbors weren’t happy, but I know that almost all of them are awake by that time so it didn’t bother me too much. Jay had to work 2nd shift on Friday so he was able to stick around and watch the process.

We now have a 4″ thick concrete pad that slopes AWAY from the house! It also eliminated the huge step from the porch to the door. The only problem is that as the contractor was propping the roof up he discovered that the header for the porch is in bad shape. This was supposedly fixed by the previous owners before we bought it. Our inspector had found an issue with it so that was one of the things that had to be fixed before we bought the house. The sellers claimed that they had fixed it so we took their word for it. All they did was put a 1″ pine board up to hold everything in place until it really started to crumble. What irritates Jay and me is that we had put this issue as a condition of the sale. We said that we would enter into the contract if the seller agreed to fix this issue, which they did. And yet, they didn’t. So now we have to get that fixed… yet another expense we hadn’t planned on. Ah, the joys of home ownership!

Anyway, the porch pad turned out really nice. The concrete contractor has a cousin who does general contracting so he will be fixing the porch header. That should begin in a little over a week. 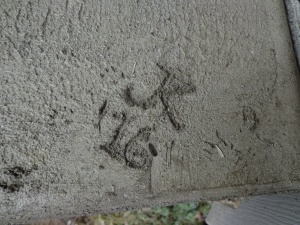 I didn’t notice until the contractor said something about it, but since Jay was home when the concrete was poured he put our initials and the date in the corner of the porch. Jay then told me that not more than an hour after everybody left and the concrete was curing… the squirrels were running all over it. So now we have squirrel paw prints on our porch.

This past weekend I finally managed to get my gardens planted. Since I wasn’t home over Memorial Day weekend it had to wait a little longer than I had hoped.

This is my rose garden. As you can see I need to thin the Irises out again. I’ve already yelled at them for being greedy and taking up more space than they are supposed to. Luckily I have friends who said they would be happy to take some of these guys.

Until my roses really start to bloom I have added a little bit of color to it. I love petunias and pansies, so I found some pretty pink petunias for this spot.

Speaking of roses, look at what my rose bush in the backyard decided to do while I was away. Isn’t it gorgeous? And to think, all I had to do was threaten to pull it out two years ago if it didn’t start budding.

I am addicted to roses, though, and always want to add more. I was looking at this garden and decided that I don’t like that hosta there in the middle. 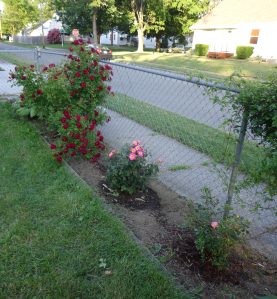 So out it came (and was split into four pieces to be given away) and I planted another rose bush in its place. Is there such a thing as too many roses?

This new rose bush is special, though. I call it Boogart’s Rose Bush. It’s not a hybrid tea (the type of rose people usually think of) and the flowers actually reminded me more of apple blossoms. They are a really pretty pink, too, with beautiful warm yellow centers. This is actually called the Home Run Series rose bush, but I’m allowed to change the name. My older sister’s nickname was Boogart and her color was pink. My mom had pink apple blossoms put on Boogart’s urn, so that’s why this is Boogart’s Rose Bush. 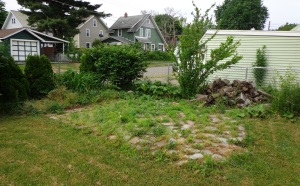 Finally, I had to turn my attention to this mess. A lot of people won’t show you their dusty corners or messy places, but I wanted you to see just what a little bit of elbow grease can do. It took me three hours and two trash cans full of yard waste, but when I had to stop (due to my allergies getting the best of me) it finally looked like…

I still have a little more to do, but look at the improvement so far! I must confess that this is my problem corner in my yard. I have no idea what to do with it. It’s the wart on my nose.

The area by the shed needed some attention, too. This shed is a piece of junk and we hate it, but it will be replaced this summer with a structure that actually keeps the weather OUT! An engineer built this shed. This is why engineers should not be allowed to touch tools of any sort. Metal roofing is supposed to be put on the building so that the water can run down the ridges and off of the building. Unlike this masterpiece, which has the metal roofing on sideways so that it can be sure to catch every drop of water and bring it inside. What an idiot…

I did manage to make some headway. Again, I ran out of trash cans to put the yard waste in so I had to stop. We have a lot of stuff in this area that I need to figure out what to do with so that it’s not in the way when the old shed gets replaced.

I have been doing a couple of other things that are gardening related, but I will wait to show you those at another time. Hopefully you have been able to get outside to enjoy playing in the dirt, too!

This entry was posted in Garden, My House, Remodeling and tagged Concrete, Garden, Our House, Porch, Roses. Bookmark the permalink.