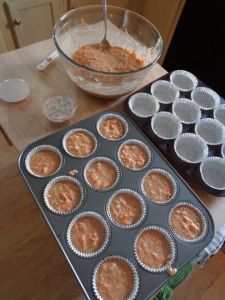 It hit me the other day that it’s been almost ten years since I was diagnosed with Celiac Disease. Wow. Ten years?!

Things have come a LONG way since I was first diagnosed. Back then I could only shop at Wegmans for my gluten free specialty foods like pasta, breads and treats. Now even Aldi’s has a large selection of gluten free products!

Even with all of this progress and the tremendous variety that now exists, I still have days where I feel like crying or screaming about how it’s unfair that I can’t eat the delicious bread sticks at Olive Garden. Yes, there are lots of substitute gluten free products, but a good portion of them are NOT good. To be honest, I find that I still prefer to make most baked goods myself. I always have the different flours on hand that are required to make my very favorite baking mix so it’s not a problem for me to whip up a batch of flour and then make whatever it is that my heart desires. 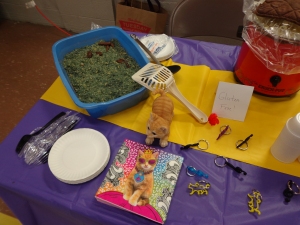 I am amazed to discover how many people are scared of trying things on their own. For me it doesn’t matter if the recipe was written to use regular flour or not; if it sounds good then I want to try it. I’ve had some flops. Some BIG flops. I’m sure that Jay remembers the tantrum I threw after I couldn’t get the Kahlua cookies to work correctly. I scraped the whole thing into the garbage and refused to bake for the rest of the night. 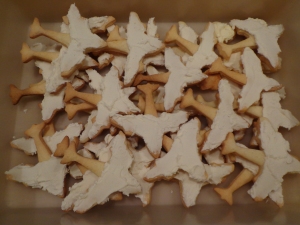 Lately I have actually been sought out in order to assist in making a luncheon gluten free at my church. I made some suggestions and offered up a recipe for Stuffed Pepper Soup so that the woman who was attending the retreat (and is both gluten and dairy free!) would be able to eat, too. I was told the next day that it was a great success and the woman who made the soup did a terrific job! 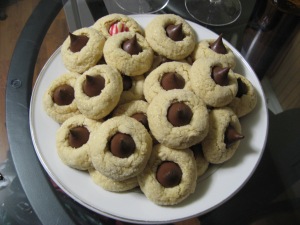 Last night as I was standing on the deck talking to the neighbor he asked where the best place was to buy gluten free grocery items. I told him what I had observed, what I typically do, and a few other suggestions.

And no, I don’t eat gluten free baked goods all of the time. I would be HUGE if I did that!

Ten years ago I was diagnosed with Celiac Disease. My mom and I didn’t have anybody to ask questions of because not even the dietitians knew much about gluten or the gluten free diet. I remember breaking down in the middle of Wegmans because it was all so overwhelming. I learned to read ingredient labels, and in turn my good friends learned how to read them as well. I learned what worked for me and what didn’t, and then I experimented. Some people say that if they had to follow the gluten free diet they would die. Well, I’m not quite that dramatic, but it is quite the learning curve. I have often wondered why I was the one in my family who was diagnosed with this disease (it’s a genetic disease, but none of my immediate family has it). Why is it that I have to be the one to sit around and smell the wonderful food as coworkers, and even some members of my family, don’t bother to remember that I can’t eat everything that they can.

I firmly believe that everything happens for a reason as God has a specific plan for all of us, whether we like it or not! It’s said that He doesn’t give you anything that you can’t handle, despite any argument that you might present to Him. I think that God gave me this cross to bear so that I can be a blessing to others. So that they don’t have to wander alone in the gluten free desert He has set me in their path, to lead the way to the deliciousness that can be had if you know what you’re doing.

In my ten years of wandering the gluten free highway I have helped people in the Celiac Disease support group that I used to belong to; friends of my parents; friends of friends; friends of extended family; fellow parishioners; and even random people in the community. I probably will never know how many people I have actually helped in one way or another, but that’s okay. Knowing that I helped make it possible for one woman to attend a retreat at church without her having to stress about the lunch hour makes it all worth it. Also, I have managed to hook people on my gluten free Stuffed Pepper Soup, my gluten free Cheesy Chester Chowder, and my gluten free Macaroni and Cheese makes me smile. 🙂