This is how we left the Spad yesterday. We had just finished striping the entire thing. My thought was that we could just leave it like this and get a few birds, but for some reason Jay wanted to keep working on it. Who wouldn’t want a Spad-shaped bird cage??

Apparently Jay would prefer to actually fly it rather than having something flying IN it. Silly Jay! You already have the paper below it for the droppings! 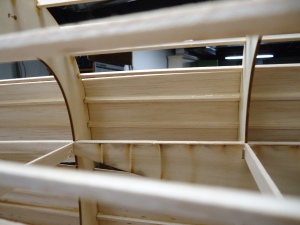 Jay is the one taking the pictures for the blog… I’m just writing up the commentary. In this picture I think that he was going for something abstract that would be titled “Looking Through the Ribs”. It could be showing how people think that an airplane is one of the greatest expressions of freedom, but the real commentary is how you’re actually caging yourself off against the environment in order to isolate yourself from the elements and bugs. Or… he could be showing us his glue joints. At this point it could go either way.

After Jay had done some more sheeting he got out the hair clips and decided to do a little bit of styling. There is nothing worse than fly-away’s on a Spad! A few clips and a little bit of hairspray will have it all fixed up in no time!

While the hairspray is drying, Jay started working on the wing. I told him that this wing seemed awfully small for this giant Spad, but what do I know? I’m just a girl!

I picked it up to take a closer look, but I broke it…. 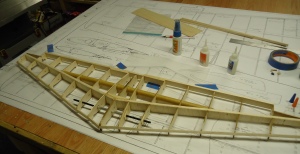 … luckily I was able to tape and glue it back together!

I don’t know why Jay has a picture of a tribal mask in here. That seems a bit odd. Maybe there is some lost tribe of airframes that I don’t know. 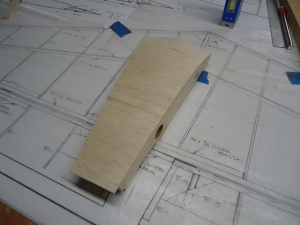 And the makings of a wooden remote control?

Whoops! Sorry, that’s my fault! It is actually the middle part of the horizontal stab with the sheeting on it. Yikes! Is my face red!

I will leave you with the back end of the Spad in your face while I go do some more research and figure out what the next parts are before I just begin posting them.

At least the covered tribal mask has been put into place.

And I see that we have a few more cowlicks on the side that need to be flattened with clips and hairspray, but we’ll get to that in the next post.