Book Review: Lady on the Hill

I have just finished reading “Lady on the Hill: How Biltmore Estate Became an American Icon” by Howard E. Covington Jr. The writing was engaging, informative, and kept me coming back for more. In fact, I was disappointed when I finished this book because it seemed like there was always something new and fascinating that I was learning with every turn of a page.

I picked up this book after returning home from my sister’s wedding. While we were out and about I asked Jay if we could stop by and visit this lovely estate. He had never seen it, and being an indulging husband, we spent almost an entire day there. I would have enjoyed spending more time, but it was hot and I was tired.

First off, if you’ve never been to the Biltmore Estate then you definitely have to put it on your bucket list. You can watch documentaries on it or programs that show it all lit up at Christmas time, but until you’ve actually visited you can’t even begin to really imagine the splendor, grandeur, or immense size of this place. 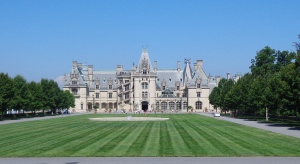 When George Vanderbilt had the house designed, along with the land surrounding it, it was purposefully designed that you wouldn’t see the house at all until you turned the corner to head up the esplanade. When you turn that corner… WOW. Out of nowhere sits this gigantic mansion. 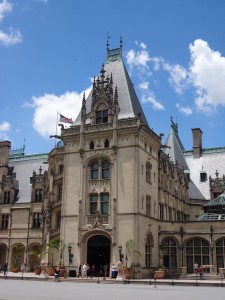 As you near the front of the house it just continues to grow. It truly is an American castle.

The house was opened in December 1895, but it really wasn’t complete at that point in time. In fact, the Music Room wasn’t completed until the 1970’s when George Vanderbilt’s grandson, William Cecil, decided to complete it in order to fulfill his grandfather’s dream.

Yes, this is a gigantic house and yes, it is the epitome of American excess (as Jay would say), but what fascinates me more are the stories behind the house. That’s what compelled me to pick up this book, “Lady on the Hill.”

I wanted to know how the house went from a private residence to being a huge tourist attraction in western North Carolina. How do they afford to keep it open? What obstacles have they run into? Do they still live in it?

Many people think that if you’re rich then you have no worries and everything is given to you. When you look at the Biltmore you think that the Vanderbilts must have had more money than brains, yet without the brains they wouldn’t have had the money. As it was, this huge house was a drain on George Vanderbilt’s income and before he died in 1914 he was trying to figure out what he could do to get extra money to make ends meet.

“Lady on the Hill” is the story of not only a great house, but also a great love. George Vanderbilt envisioned that Biltmore would be a self-sustaining estate, and though he never saw that come to fruition his descendants have worked very hard to make that a reality. Perhaps you think that all of the marketing gimmicks are just that… gimmicks to pull the suckers in, empty their pockets, and send them out the front gate a lot lighter in the pocketbook just so that those greedy Vanderbilts/Cecils can get even wealthier.

What many people don’t realize is that it takes a LOT of money to keep up a house of this magnitude. It also takes a lot of money to continue to preserve the history that lays behind these doors. Again, if you’ve never been to the Biltmore you need to go. It’s like walking back into time, except you are able to get a glance of what it was like for the upper echelon of our society. My ancestors were all a bunch of dirt-poor farmers who would have thought that they were living in the lap of luxury if they’d been given an extra stall in the dairy barn that used to be on the property.

Anyway, this was a real eye-opener into the behind-the-scenes operational stuff that I find to be interesting. If you have the desire to learn more stories about the house after it was built then this book is the one that you need to read. You definitely won’t be disappointed. You can imagine sitting on the back porch of the Biltmore Estate with the book on your lap, looking out at this scene… 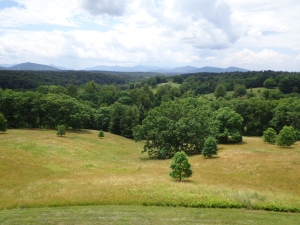