It seems like Jay and I finally get around to our home improvement projects in August. Apparently we are so busy doing other things that summer starts to end and we panic about what we needed to get done. Last year we had our new driveway put in. This year we knew that we had to get insulation put in the ceiling of the addition above our family room and dining room.

This past winter we’d had a MAJOR leak in our dining room and had to call in a repair person the Monday before Christmas. We lived with this rag until last month. I didn’t want to do anything with it until we were fixing the rest of the ceiling. As you can see, it had been patched at least once in the past. We figured that when we had the insulation put in that we would have the contractor replace this ceiling at the same time. 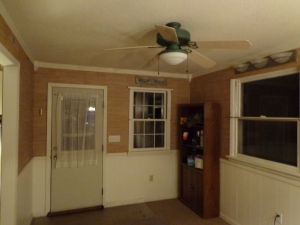 We developed a leak in our library, though, so we had somebody come out and quote the insulation work along with repairing the roof to fix the leaks. It was determined that the whole roof over the addition needed to be replaced (which I had actually considered before the contractor got there to give us an estimate). You see, whoever put the roof on had no clue what they were doing. Things were done incorrectly, which resulted in the leaks. First off, it was an engineer from a local high-profile company who built this addition, which leads me to a very important home remodeling tip: IF YOU HAVE NO CLUE WHAT YOU’RE DOING, THEN DON’T DO IT!! THIS ESPECIALLY APPLIES IF YOU HAVE A DEGREE IN ENGINEERING OF ANY SORT.

The contractor completely replaced and corrected the roof above the addition, which included the insulation that we needed (again, the stupid engineer apparently didn’t think that a house in a very cold climate would require insulation between the ceiling and the roof). Along with that we had him replace the ceilings in the dining room and library due to the water damage. It was not a cheap bill!

I decided while we had the room empty, and the molding down, that I would also tear the old nasty wall paper off and repaint the dining room. I had been living with the previous owners’ taste in tacky wall paper. If you look in the first pictures that I posted you can see the “wood” wallpaper. It was one of the worst wallpapering jobs that I had ever seen. 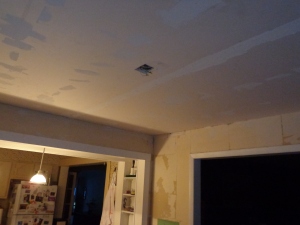 The contractor’s workers, Steve and Shawn, actually peeled the wall paper off for me. They also started to smooth out the walls (there was a texture on them that I didn’t understand, but it had to come off!), but I told the contractor to have them stop because I would do that once they were gone. I didn’t tell him that I just wanted him to get the job done and then go. Steve and Shawn were very nice, polite and did a great job of cleaning up every night, but I wanted my house back to myself when Jay was at work. Also, the cats had to live in the basement during the day when the guys were here working. 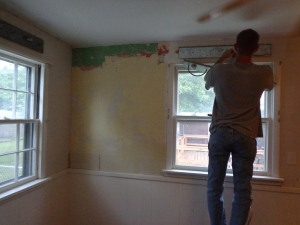 I believe there were at least four layers of paint on these walls, plus the top layer of wall paper. Jay helped me to put joint compound on the walls to smooth it out (I tried sanding it off, but that didn’t work). Then I smoothed out the dried compound as best as I could before priming it.

It’s amazing how much better it looked with just the walls primed.

I concentrated on getting the dining room done first because most of the furniture was sitting in the family room, and it was somewhat in the way. Also, it was somewhat depressing to walk into the house after a long day at work and see my house all topsy-turvy. 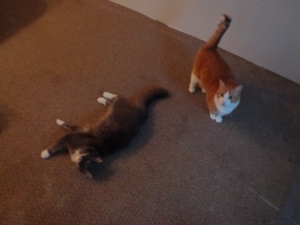 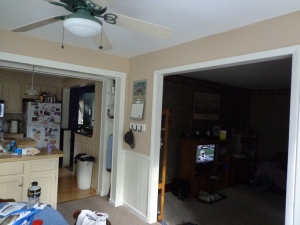 It took two coats of paint to get the coverage that I wanted, but I am very happy with the results. I used paint that I had from the last house that I had lived in before I was married. This is a nice, warm and welcoming tan that goes well with the darker tan that is in the family room (where Jay was watching football). I also painted all of the bead board and trim an off-white so that it wasn’t a stark-in-your-face white.

Even though these pictures were taken at two different times of the day, you get the idea of the transformation that occurred. 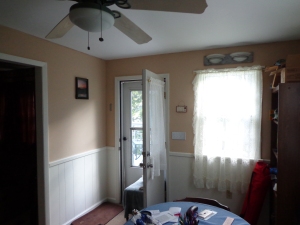 With all of the nails removed I could now decide where I wanted to hang things. I wasn’t just tossing stuff wherever there was a nail.

To refresh your memory…

(I know, not the best picture, but you get the idea)

Again, I had help with the placement of things on the wall. He let me know if the pictures were hanging straight. Doesn’t he look so enthusiastic?! 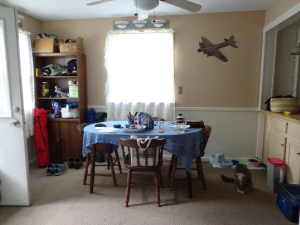 Jay’s metal airplane now has a proper place. I tried to tie everything in somewhat. The light fixtures above the windows came with the house and they are a dull silver metal, which is why I kept the airplane in the dining room. I also moved the dull silver metal switch plate from the library to this room. And Jay spray painted the four-switch plate next to the door a silver to make it kind of match the other one.

The only thing left to do in this room is to get some new shelves for the inset shelving (it goes to the right of the airplane). The old ones were wood and very unevenly cut. I mentioned that I thought some frosted glass shelves would look really nice in there. They would go with the frosted glass light fixtures that hang over that counter. We also have to get the molding put up. Other than that, this room is finished. And no more nasty wall paper or patched ceiling! Hopefully this winter we will notice a big difference in the temperature in the family room now that there’s actually insulation in the ceiling.

Now on to the library…