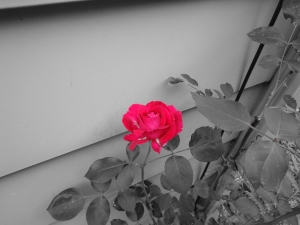 I apologize. This was the closest picture that I had that came close to representing Easter. The crown of thorns on Jesus’ head reminds me of roses and their thorns, so hopefully you will allow me the use of this beautiful rose for this post.

This has been a busy week for me. It’s my first Easter that I’ve actually been part of a church parish and thus I get to participate in all of the activities. Since I’m in the church choir I get to sing at most of them. We’ve been holding lots of practices, I managed to volunteer myself to help sing the psalms, and starting tomorrow night I go four straight days of attending large masses. I’ve never participated in most of these events so I have no idea what to even expect. It’s okay, though. As long as I’m there giving praise to our Lord and Saviour via my voice, it’s all good.

I have been reminded this week that God so loved us that He gave us His only son, who was then crucified and paid for our sins. Can you imagine doing that? Knowing that you had to give your child over to terrible pain and suffering so that the rest of mankind might be saved? What kind of love is that? I must admit that I don’t know if I could do it. Perhaps I’m selfish or I just haven’t got enough faith. Would you be able to do it?

My mom was in the hospital this week. She had a migraine that was worse than any migraine she’d ever had. The pain killers were barely dulling the pain that she was experiencing. On top of that, the doctors were concerned about her heart because apparently her heartbeat was slower than they would have liked. Until they figured out what was causing the headache we were given possible diagnosis’ such as she might need a pacemaker, she might have meningitis again, or the worst one that she might have a brain tumor. My dad’s older brother passed away due to a brain tumor so that’s not exactly what my family would like to hear about my mom. We were very lucky in the fact that it was one of the medications that my mom was on for her blood pressure that was causing her headache. The doctors figured it out, changed her med levels, and today my mom went home pain-free.

I’ve already lost my older sister and that caused heartache that still hasn’t completely healed. I can not imagine knowing that my child, or sibling or parent, had to be sacrificed for the good of others. And can you imagine the kind of faith that it must have taken for Jesus to go through all of that and at the very end say, “Forgive them, Father, for they know not what they do!” These people inflicted all of that pain and suffering on him, and he’s asking that they be forgiven?? I wish that I was that kind of person.

As I go through this weekend, singing at the various holy functions, I know that it’s going to run through my head… Could I have betrayed Jesus like his disciples did? Could I become part of a crowd that screamed for the death of an innocent man? Could I become so callous and uncaring that despite the fact I had decided the person was innocent, I bowed to pressure and gave him over for crucifixtion anyway? And how would I, somebody who loved and belived in Christ, be able to watch his suffering without attempting to step in?

This entry was posted in Faith, Spiritual and tagged Faith, spiritual. Bookmark the permalink.