Posted on September 8, 2012 by civilwarrose5

Have I mentioned how awesome Jay’s Warthog looks? Yesterday he traveled out to eJets (an electric jet event) with the Hog. I was so upset that I couldn’t go with him because a) I love to see it fly and b) I love the reaction that people have when they see it fly.

Jay added a little surprise to this jet that makes it a bit more realistic, and it’s one component that the guys who have flown big aircraft really get a kick out of. Jay has added an “APU”. For those of you who have no idea what that is (and believe me, I had to have it explained to me), it stands for Auxiliary Power Unit. What it does is it starts up and gets things moving first (the heat/cooling system, etc) and then once that has powered up enough the engines will start up and get the rest of the jet up and running. The modification that Jay did really does sound like an actual APU starting up!

In preparation for eJets, though, Jay added a few more touches to make it look a little more realistic. 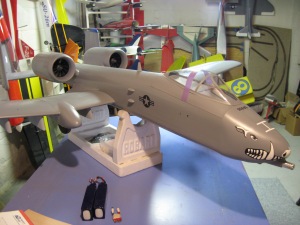 This is pretty much how it has looked since April. It looks great, right? 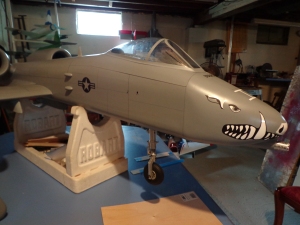 Here it is with panel lines now. Not a real huge difference, but enough that when you see it in person it really looks good.

Here’s a view of the other side. You can see the panel lines that were drawn on the wings. And a little more on the fuselage.

Didn’t he do a great job on this? I’m really impressed with how it turned out. When I first saw the foam pieces that came in the huge box I had no idea that it would end up looking as good as it does. Especially when Jay is flying it. I really wish that I could have gone with him this week!

1 Response to A-10 Warthog Update